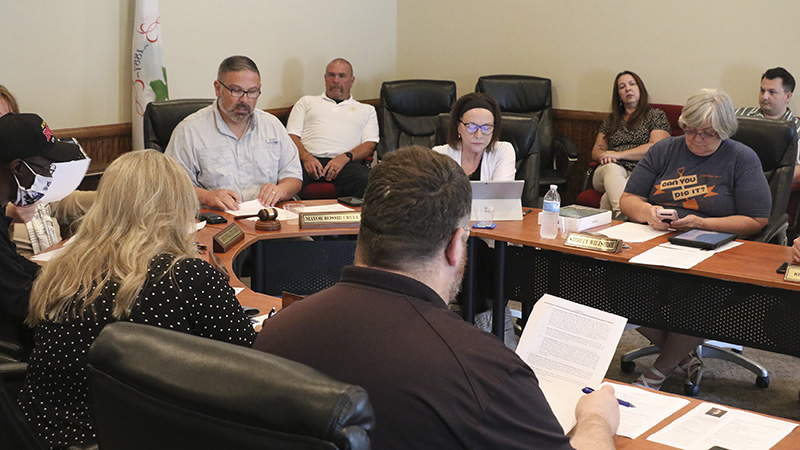 Members of the Poplarville Board of Aldermen gathered Tuesday for a final meeting before the next administration takes over next month. Photo by Jeremy Pittari

During that meeting, the Board approved a motion to extend the emergency declaration due to the pandemic. Mayor Rossie Creel said it was best to leave it in place so the incoming Board can determine if they want to keep it in place.

A request for final payment from South Mississippi Planning and Development District for $5,000 was approved by the Board for work done on the City Square Park.

The Board also approved a motion to allow former Wiggins Police Chief Matt Barnett to write and submit for a grant from the 2020 Edwin Byrne Memorial Justice Assistance Grant.

On July 1, at 6 p.m. the returning and new members of the Board of Aldermen and new mayor will be sworn in during a ceremony set to take place at City Hall in the board room.

Those individuals will also take part in a workshop set for June 17, at 6 p.m. in the board room. Outgoing Board member Shirley Wiltshire told those newly elected members in attendance during Tuesday’s meeting, that they can expect to learn a lot during the workshop.

At the end of the meeting, the Board held an executive session to interview for the position of city attorney and conducted an interview with an applicant for a public works laborer.

After executive session, the Board approved a motion to hire Jonathan Swain to the position of laborer with public works at a rate of $12 per hour. No motion was made pertaining to the city attorney, said City Clerk Jane O’Neal.

Hunting club loses out on rebid process, asks for…