Mayor elect shares plans at Coffee with the Mayor elect 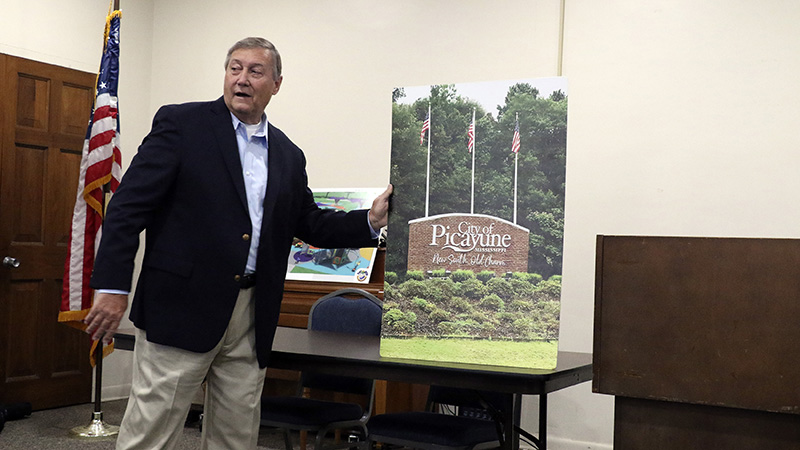 Mayor elect for the city of Picayune shows off a sign he would like to have installed at the entrances of Picayune during Friday’s Greater Picayune Area Chamber of Commerce Coffee with the Mayor elect. Photo by Jeremy Pittari

Residents within the city of Picayune got an opportunity to hear from the incoming mayor during Friday’s Greater Picayune Area Chamber of Commerce Coffee with the Mayor, elect.

During that event, Jim Luke, current city manager and mayor elect set to take office on July 1, met with community members to share his vision for the upcoming term.

Some of those accomplishments have been covered during meetings of the current administration, such as $1.9 million in BP funding to renovate Friendship Park, of which $600,000 will be used to build a new playground.

Other past achievements included construction of Crosby Commons that offers five acres of green space in the city, the addition to historic City Hall that now provides 20,000 square feet of space for city employees to conduct business and the construction of several parking lots in downtown to accommodate residents and visitors.

Luke also said that continued meetings with Southern District Transportation Commissioner Tom King eventually resulted in the cleaning up of exits 4 and 6, which took place recently.

Proposed projects on the horizon are potential raises to police officers, construction of a new police station and an as yet unannounced replacement for city manager.

Police Chief Freddy Drennan was asked to speak about the current state of his staff and facilities. He said that currently incoming police officers in the city make $14.65 an hour, which is less than just about every other comparable department in this region, to the tune of two to three dollars less an hour. That creates a situation where the city’s taxpayers fund the required training of those officers only to have them move on to another department in a short time to make more money.

“We are on the verge of having rookies training rookies,” Drenann said.

As for the facility those officers and the department’s administration operate out of, its current state of dilapidation and need for a replacement have been discussed for several years now. A new roof was put on that facility a couple years ago due to the many leaks, at times needing upwards of 18 buckets to catch the rainwater infiltrating the aging structure, Luke said.

Luke, the former police chief turned city manager who will now take over as mayor, said he started working at the department when that facility was built back in 1978.

“It would not pass the building codes today,” Luke said.

According to several surveys of the building, it not only contains asbestos, but mold has been detected.

Drennan even shared a story about how during the last Gubernatorial election the Lt. Governor came through Picayune needing a place for his wife to use restroom facilities. They chose the police station thinking it would be a public place that was safe. Drennan said that as soon as she walked into the public restroom, she walked right back out and asked to go somewhere else. Tours of the facility are being offered to the public so they can see for themselves.

When asked by the Item if a replacement for city manager has been selected, Luke said applications are still being accepted until noon on Monday, and that afternoon he plans to meet with the returning incumbents and incoming members of the City Council to review those applications.

Luke said his personal choice would be to choose someone like Drennan, who has a proven record of success in leadership roles. Drennan was appointed police chief in October of 2020, coming out of retirement to do so.

Bulldogs Set To Battle Texas Tech In The Liberty Bowl