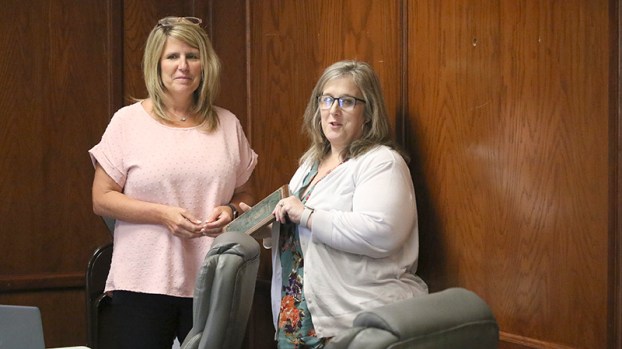 Board of Trustees Vice President Jill Smith, at left, presents Superintendent Konya Miller with a plaque for her years of service to the Poplarville School District. Miller will be retiring at the end of this month. Photo by Jeremy Pittari

Konya Miller, Poplarville School District’s superintendent who will be retiring at the end of this month, was recognized by the district’s Board of Trustees during Monday’s meeting.

After she was given a plaque for her years of service, Miller said that her success has been due to the support of her staff and the Board of Trustees.

As of July 1, soon to be former Poplarville High School Principal John Will will take Miller’s place as the superintendent.

Enrollment at the school was at 440 students, of which 417 attended classes in person while the remaining 17 were using virtual means.

During discussion of clinic health reports for the prior year at all campuses, Miller said that the number of student visits to nurses was up last year due to the pandemic.

“That shows they were instrumental in keeping the school going,” Miller said.

The District is also researching the best place to install a system of solar panels donated by Mississippi Power. Miller said the cost to the district will be minor, about $3,000. While placement of the system has not been finalized, the district is considering installing the system at the High School.

The Upper Elementary campus will soon have additional playground equipment for children with special needs. Miller said state funding from IDEA will provide $13,000 for that purpose.

— Approved a bid from Curriculum Associates of $115,809 for iReady.

Poplarville’s Board of Aldermen held a quick meeting Tuesday, the last the current administration will hold before the next administration... read more