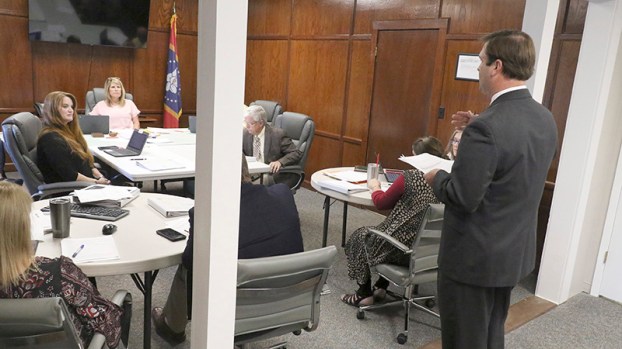 Charles Abbot, a member of the Pophill Hunting Club, asked the Poplarville School District’s Board of Trustees to rebid a hunting lease his hunting club did not submit a bid for. Photo by Jeremy Pittari

Hunting club loses out on rebid process, asks for rebid

Poplarville School District’s Board of Trustees was asked to give special privileges to a hunting club that did not turn in a bid before the deadline during Monday’s meeting.

Before consideration of 16th section land matters during that meeting, Charles Abbott, an attorney with a firm in New Orleans, addressed the Board about a hunting lease for the Pophill Hunting Club. He began his presentation by asking for extra three to four minutes over the usual five minutes to make his case.

Abbott said that the hunting club has held the lease on a parcel of land, identified as Section 16-2S16W, for the past 15 years, and has paid more than the minimal cost to do so. In addition, members of the club have invested time and money in maintain the property, Abbott said.

Members of the club missed out on being able to submit a bid on that lease due to an error in the mail. Abbott said correspondence concerning the rebidding process was sent to his father’s home, which is received at a neighbor’s house due to his home’s distance from the main road.

Abbott said when his father checked the mail on May 22, he found a letter from the school district dated April 19, and the week of May 17, both of which were received after the bidding process had ended on May 10. Abbott said that when his father contacted the superintendent’s office, he was informed that the staff also attempted to contact him via phone the day of the deadline, but did not leave a voicemail.

Abbott added that the call was made about an hour before the deadline.

Abbott said that on May 10, a single bid was made on the property for the minimal bid and came from whom he said was the father of school district employees. He added that his hunting club was willing to continue to pay $1,600 more than the minimum, equating to an extra $8,355 in revenue over the five year lease period. He asked the Board to consider rebidding the lease.

He asked why a minimum bid would be placed on the property unless they had prior knowledge that a bid was not placed by the existing bid holders.

“I don’t like creating conspiracies… but something does not pass the smell test,” Abbott said.

Later in the meeting, board attorney Jim Keith asked if Abbott was accusing someone in the district of providing confidential information, and if he had any proof. Abbott backed down from the accusation saying it only feels that way, but he has no proof to back it up.

Superintendent Konya Miller said that the Board opened a bid on that property last month, which was for $4,830 from Clint Parker.

Current lease holders for the last two bids will be contacted to see if they want to match the highest bid.

A budget hearing was held by the Picayune School District Tuesday prior to the Board of Trustees meeting. The total... read more