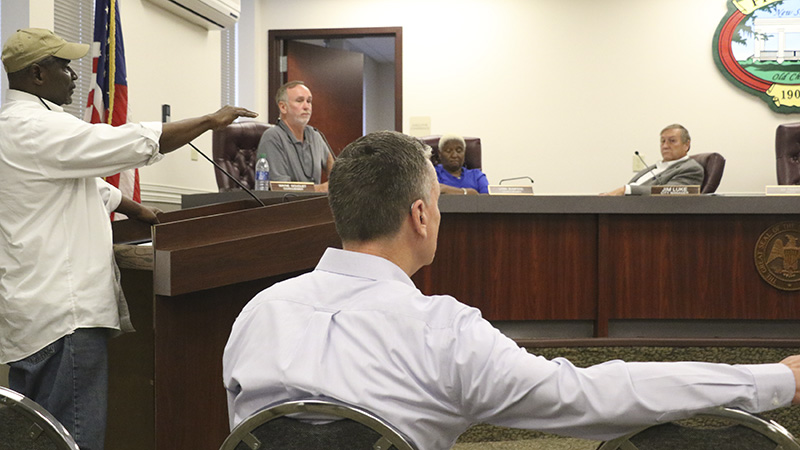 From left, Leaverne Guy asks members of the city of Picayune’s City Council who was responsible for the placement of a Confederate themed sign in front of the Intermodal Transportation Center along Highway 11. Guy is running against City Manager Jim Luke, at right, for mayor on Tuesday. Photo by Jeremy Pittari

Discussion of the placement of some confederate signs between two mayoral candidates got a bit heated during Tuesday’s Council meeting.

After conducting a number of routine business, mayoral candidate Leaverne Guy addressed the Council about a concern he has regarding the replacement of the Confederate signs in several spots within the city. City Manager Jim Luke is running against Guy in Tuesday’s election.

Guy said that during a past attempt to attract a local business to town, the representative immediately asked to leave the city after seeing a sign advertising the presence of the Sons of Confederate Americans, which displays the Confederate Battle Flag. Those signs are placed on a large white backdrop that includes signs for a number of other local civic groups in Picayune at the Memorial Boulevard and Sycamore Road entrances of the city.

Guy also brought up the presence of another sign placed at the Intermodal Transportation Center along Highway 11 that outlines the history of Confederate battalions in Pearl River County.

Those signs were removed by city employees back in early May, but were replaced days later after Luke called Representative Stacey Wilkes to ask if it was legal for the city to remove them, according to previous coverage. Wilkes cited Mississippi Code 55-15-81, which basically states that any sign that has significance of any historical war can not be moved unless it’s placed in a more prominent place.

Guy started his speech during Tuesday’s meeting by asking for 10 minutes instead of the three minutes typically allowed.

Guy then began to ask each member of the Council and Luke if they approved installation of the sign on Highway 11. When he got to Luke, the city manager refused to answer, instead turning to the city attorney, requesting he answer for him. Guy again asked Luke directly if he approved installation of the sign, to which Luke responded abruptly, “You are not going to use this as a political stage.”

When Guy tried again to have Luke answer the question, Luke turned to Mayor Pro Tempore Wayne Gouguet and asked, “Are you running this meeting?” Mayor Ed Pinero attended Tuesday’s meeting via telephone.

Gouguet then directed Guy to get to the point.

Ultimately, Guy’s point was that the sign was placed on the property of the Intermodal Transportation Center, which is in the right of way maintained by the Mississippi Department of Transportation. He added construction of that facility was funded by MDOT, which was also outlined in section 3 as a reason for the city to remove it. Guy then requested the city remove the sign at the Intermodal Transportation Center and those along Sycamore Road and Memorial Boulevard.

“Those things hurt the image of the city, makes the city look antiquated,” Guy said.

Councilor Larry Breland asked for clarification on the matter from city attorney Nathan Farmer and for Farmer to look into the legality of the placement of those signs.