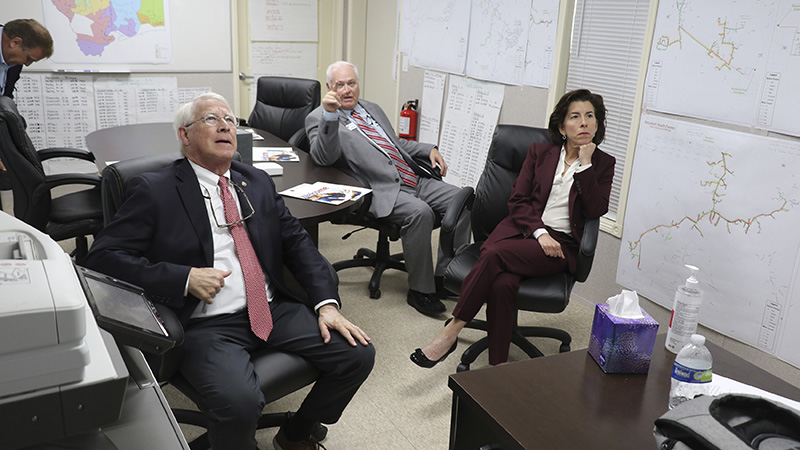 From left Senator Roger Wicker, Coast Electric CEO and President Ron Barnes and U.S. Department of Commerce Secretary Gina Raimondo look at charts that depict the progress being made in rolling out broadband Internet to underserved areas in Pearl River County. Photo by Jeremy Pittari

The rollout of broadband Internet to the most underserved areas of Pearl River County was the topic of conversation during Friday’s visit to Coast Electric’s Picayune office by  Senator Roger Wicker and U.S. Department of Commerce Secretary Gina Raimondo.

That new service, called CoastConnect, was made possible in part due to the state’s Broadband Enabling Act passed in 2019, and partially paid for with CARES Act funding.

The first phase of the project will cost $15.3 million and focuses on rural customers in Pearl River County. CARES Act funding paid for $6.1 million, with Coast Electric covering the difference. While that only covers residents in the Derby, Crossroads and McNeill served by two substations in Pearl River County, it will provide access to gigabit Internet connections to that most underserved area in this county.

Barnes said that in those areas, there are five electricity customers per mile on average, demonstrating the rural nature of the area.

Phase one of the project began back in August of last year, and by Nov. 3, the first broadband customer was connected to the system. The first phase of the project was completed by February of this year and phase two was approved that same month. Barnes said he plans to present phase three to the Board of Directors next week for approval.

By February of this year, 1,000 customers were receiving Internet service via CoastConnect. That number currently stands at 1,700 customers.

“Our biggest problem is we can’t get them connected fast enough,” Barnes said.

But progress is moving forward with the project. Barnes said the initial plan was for the entire project to take six years. That figure was recently cut to four years. As of Friday, he said 1,000 miles of the 4,500 miles of planned main fiber have been installed.

During Friday’s visit, the dignitaries got to hear from Ashley Shuck, a Pearl River County resident who said her family is currently benefitting from CoastConnect. Shuck said that prior to CoastConnect being offered at her Carriere/Poplarville address, her husband’s family homestead was potentially going to be a weekend retreat. But now they have made it their own family home complete with farm animals, garden and access to high speed Internet. Shuck said that access to broadband allows her to work from home and care for her family.

Phase two of the CoastConnect rollout is expected to be complete by the end of this year, and appears to focus on the area surrounding Highway 43 North up into Henleyfield and beyond.

After the visit to Coast Electric, Wiker and Raimondo moved on to the other stops in the tour, including the Mississippi Aquarium in Gulfport to hold an industry roundtable, University of Southern Mississippi Marine Research Center to hear about the maritime research going on there and a CVS location in Gulfport to see an active COVID-19 vaccination site.

Mayor elect shares plans at Coffee with the Mayor…