Breland asks why his request was not competed 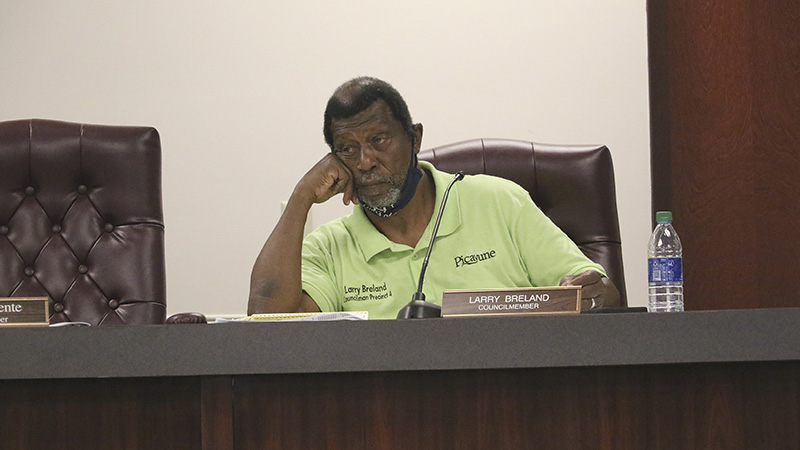 City Councilor Larry Breland started Tuesday’s meeting with questions concerning why his request made at the previous Council meeting had not taken place, a discussion that lasted more than 20 minutes.

During the previous meeting, held on May 18, Breland requested that a court document, specifically Circuit Court document 242 from the court case entitled City of Picayune, a Mississippi Municipal Corporation vs Landry Lewis Germany Architects, P.A. F/K/A Landry and Lewis Architects,  P.A.: Endurance American Insurance Company; and John Does 1-5, filed in Pearl River County’s Circuit Court, be added to the minutes.

The document outlines the details as to why a mistrial was declared in that case, which was in part was due to the fact that Breland’s son was on a jury hearing evidence in the suit. That suit was filed by the city against the architectural firm, who oversaw the addition to City Hall. Shortly after it was completed,  flooding occurred. One other reason for the mistrial included there being less than 12 jurors on the jury after the alternate was released from the jury earlier in the trial.  A portion of document 242 states, “The Court met in chambers with all counsel and the juror, and questioned the juror. The Court finds the juror did not purposely fail to inform the court of that relationship. However, had this relationship been disclosed during voir dire, the Court would have, on its own motion, excused the juror for cause.”

City Clerk Amber Hinton said the document was not included in the packet due to length but would be part of the official minutes when completed.

Breland said that when he noticed the document was not part of the packet, he wrote a letter that he requested be included in Tuesday’s packet, which was also not included.

Hinton apologized and said she misunderstood his request in relation to the letter. City attorney Nathan Farmer suggested the letter be included in Tuesday’s minutes.

A motion was approved to add or append the May 18 meeting’s minutes to ensure that document 242 be included in the minutes of the May 18 meeting, along with copies of his remarks made at that meeting and that his letter be added to Tuesday’s minutes.

The Council then moved on a routine matter to adopt an ordinance to impose utility sales tax. Hinton said the city already collects sales tax on the sale of water and sewer services, and this matter was just a formality since at times the city is audited on those tax collections.

On average the city receives between $6,000 to $8,000 in sales tax diversions from the state for the sale of water and sewer services.

Mississippi Highway Patrolman killed in the line of duty