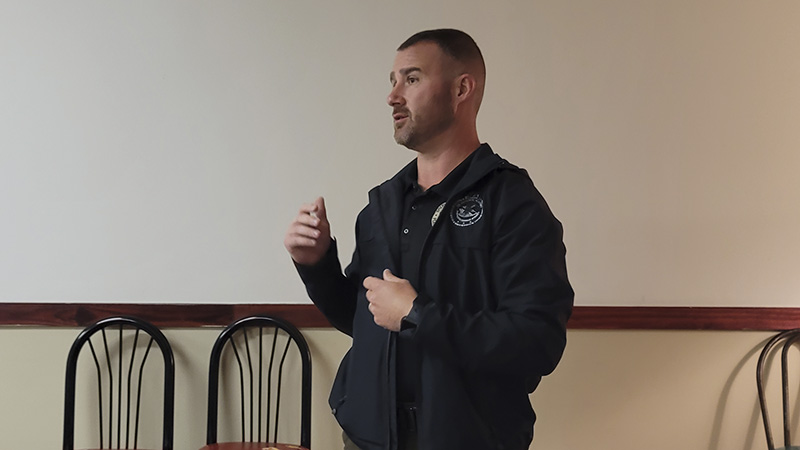 Maj. Joe Quave with the Pearl River County Sheriff’s Department has a presentation about opioid overdoses that he can either present to a club or organization, or provide the resources for so schools can share the information with students. Photo by Jeremy Pittari

At times in Pearl River County, first responders are sent to multiple calls in a week that involve overdose deaths that are usually associated with the use of opioid based drugs.

Maj. Joe Quave has been sharing the message of the dangers of abusing opioid medications and illicit drugs through presentations with local civic organizations and by providing school districts with the source material they can use to educate students through a program called Uplift Pearl River County.

One such presentation was provided to members of the Exchange Club of Picayune on Wednesday.

During the presentation, attendees learn that heroin use is one major aspect of opioid overdoses. Typically when more than one death is associated with heroin use in a short time period, it could mean that a batch of the drug was laced with fentanyl in an attempt to maximize profits. Mixing the two substances together makes use of heroin that much more likely to lead to an overdose.

But heroin is not the only source of opioid abuse and overdoes. Most such cases come from the use of prescription medication provided to a patient who is dealing with pain of some sort. Quave said that about 80 percent of the people who overdose had a prescription for a natural or synthetic opioid based drug from their doctor. The use of heroin, which is illegal, is also associated with opioid abuse. Quave said prescription opioids and heroin have a similar effect on the human body by creating a sense of euphoria and pain alleviation.

“We all know somebody that is dealing with addiction,” Quave said.

When prescribed an opioid medication, Quave reminds residents that it’s meant to be a temporary situation and it’s best to get off of those medications as soon as possible.

If the person did not acquire the drugs from a doctor, the next most popular source is a friend or family member who does have a prescription, about 54 percent of the time that occurs.

It’s also a good idea to not leave prescription medication in a vehicle, especially a vehicle that is left unlocked.

Most of the time, it’s hard to tell if someone is addicted to an opioid since those drugs don’t lead to a major change in physical appearance. Typically friends or family are the only ones who can notice slight changes in a person’s appearance and actions that denote addiction to an opioid.

While there are medications out there that are designed to help people beat an addiction to opioid based drugs, Quave said that the use of one drug to counteract another is not supported by the Sheriff’s Department. Instead, he suggests seeking help through other means, such as through counseling or one of the several treatment centers.

As for statistics, most people who overdose on opioids are white males between the ages of 25 to 55.

Quave said he can provide the presentation, which includes links to informative videos, to school districts so staff can present the information to students.