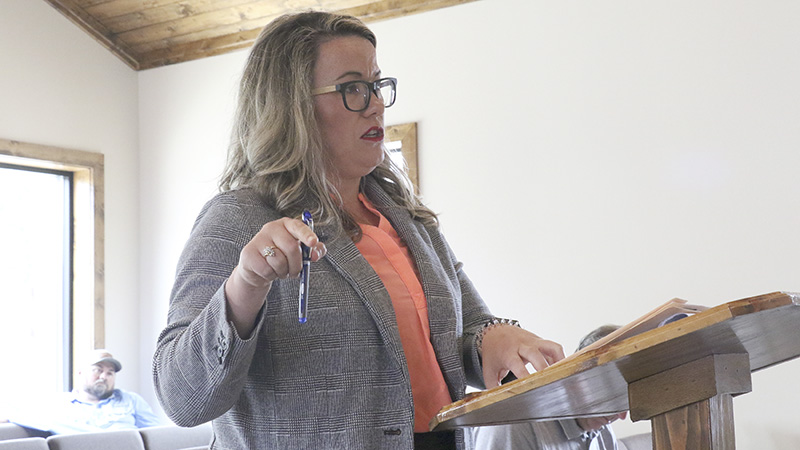 Pearl River County Economic Development Director Lindsay Ward speaks to the Board of Supervisors about the benefits of adopting a tax abatement ordinance countywide. Photo by Jeremy Pittari

Pearl River County’s Board of Supervisors heard a request to consider tax abatement for local businesses that invest in additions or upgrades and heard about changes being made in local volunteer fire departments to ensure they have the best equipment.

Lindsay Ward, the county’s Economic Development Director, asked the Board to consider a tax abatement ordinance similar to what the cities of Picayune and Poplarville recently adopted. Ward said adoption of the ordinance will allow any business that qualifies for a break in their city taxes to receive the same break in county taxes. The abatement program does not apply to taxes paid to school districts.

According to previous coverage, those abatements provide higher savings to improvements made to a business in the historic downtown area of Picayune. A certain amount of savings can also be had in other areas of the city, but not at the same rate as in the historic part of the city. Those abatements would be good for up to 10 years, depending on certain circumstances.

Poplarville’s program applies to all businesses within that municipality, and at the same rate regardless of the location. However, the program will not go into effect in Poplarville until the next administration takes office in July.

If the Board of Supervisors approve the ordinance to establish a similar program countywide, Ward said it could go a long way to attract new businesses here.

In other business, Pearl River County Emergency Management Director Danny Manley said McNeill, Henleyfield, Crossroads and Pine Grove Volunteer Fire Departments have received or will receive grant funding soon that will help standardize air pack systems across all departments. By standardizing the air packs, the firefighters will have access to the same equipment while responding to mutual aid calls, ensuring they work seamlessly.

Another matter Manley brought up was a need to demolish and rebuild the training center at Picayune Fire Department’s Station 1. Manley said he has been working with officials within the city of Picayune for months on this project, which the city is heading up.

Estimates put rebuilding that facility, which includes the tower and concrete burn building, between $260,000 to $300,000. Manley said the facility was condemned about six years ago. Manley brought the matter before the Board to inform them of his work with representatives of the city of Picayune to seek grant funding from a local source. That application has not been submitted yet. He anticipates the grant will require a 25 percent match, which the county could possibly assist with by providing county employees and equipment to conduct the demolition of the old facilities. District III Supervisor Hudson Holliday suggested using PRCC’s workforce students to help with the demolition since county employees are backed up with other work.

Manley suggested keeping the training facility at the Picayune Fire Station 1 because the station is manned each and every day. Additionally, when volunteers get to train with full time firefighters it helps build relationships during mutual aid calls.

Chamber of Commerce to hold new golf tournament for…