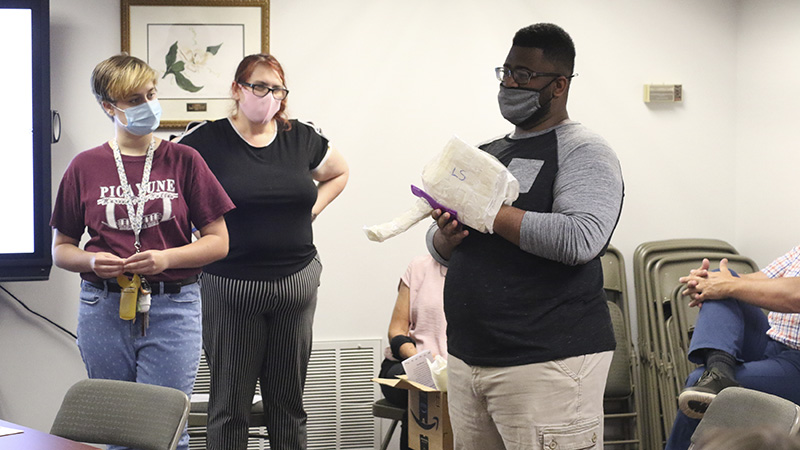 From left, Kellie Watts, Erin Clement and Tremon Perkins describe how their engineering class designed and developed a prosthetic for a three legged dog. Photo by Jeremy Pittari

Students attending the Picayune School District’s Career and Technology Center used engineering to design and develop a prosthetic for a three-legged dog.

Two students who attend the Center’s engineering program presented the project, called Project Lucky Paw, at Tuesday’s meeting of the Board of Trustees.

Tremon Perkins and Kellie Watts, who are second year students in the Center’s engineering program, said that hours of work went into designing and printing the parts using a 3D printer.

The dog, named Bea, was part of a large group of puppies and dogs rescued from a hoarding situation where more than 80 dogs were found living in less than ideal conditions. Bea lost one of her legs because it got jammed in a kennel door while under the care of the previous owners. The dog also suffers from a fused spine.

As a result of the injury, her leg and a portion of shoulder had to be amputated.

Erin Clement, the program’s instructor, became aware of the dog after her neighbor adopted Bea.

Clement said one aspect of the program is the students need to complete a capstone project that will benefit the community in some way. Creating the prosthesis was the project they came up with.

During the design phase the students came up with two attachments that connect to a harness on Bea. The attachments are a wheel and a replacement leg. Most of the parts were 3D printed, with the exception of any nuts and bolts.

Students used a computer program called Solidworks to develop the parts they wanted to print, taking about 50 hours to design the parts and prototype them. Special grades of plastic were used to print the parts, most of which are biodegradable.