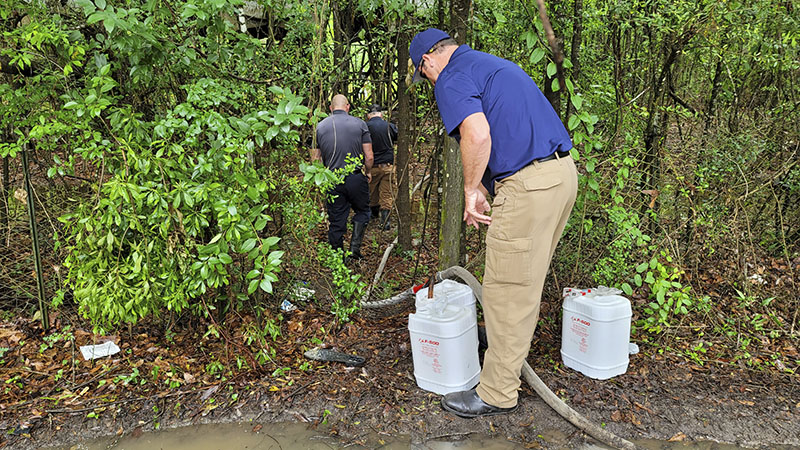 Picayune Fire Department personnel apply fuel buster to a petroleum based product that was released from containers in the area of Highway 11 near Martin Luther King Jr. Boulevard Wednesday afternoon. Photo by Jeremy Pittari

A bad smell initially thought to be a natural gas leak turned out to be due to leaking old containers in the woods near Quick and Grice on Highway 11 near Picayune’s Industrial Park. The situation is was worked by the Picayune Fire Department on Monday and Wednesday.

Fire Marshal Josh Abercrombie said the city was alerted to the smell on Monday. After city personnel checked the nearby natural gas station where an additive is mixed with the natural gas to ensure leaks can be detected by smell and determining that was not the source, the city employee checked the area of the storage tanks in the woods.

Fire Chief Pat Weaver said firefighters were sent to the location of the old containers and determined an as yet unknown petroleum based product in that area leaked. A product called fuel buster was applied to the area by firefighters to break up the chemical and quell the smell, but the recent rains dissolved that substance. Wednesday afternoon fire department personnel were back at the site, which is on private property, applying more of the fuel buster to lessen the odor.

Abercrombie suspects the leak was caused by someone tampering with the tanks since a valve on the tank was removed, but was easily reinstalled by fire department personnel.

Weaver said the Mississippi Department of Environmental Quality has been called, and will assess whether the site will qualify for Superfund cleanup efforts.

He said there was no danger to the residents.