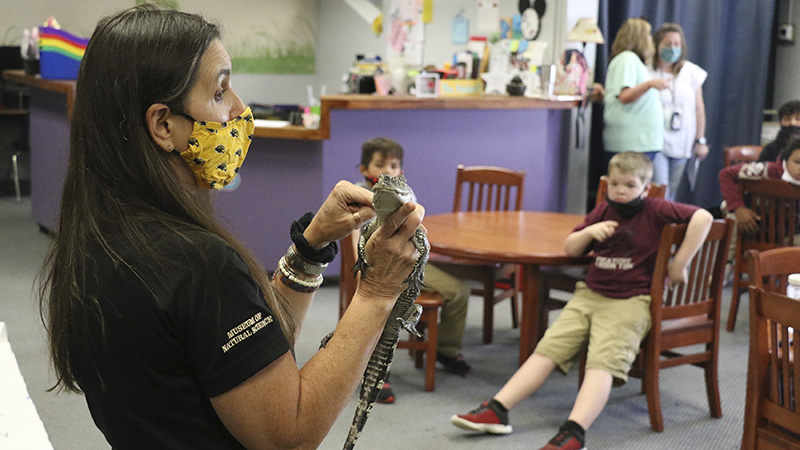 A representative from the Museum of Natural Science shows students at Nicholson Elementary a live alligator in an effort to educate them on the importance of preserving nature. Photo by Jeremy Pittari

As the school year winded down just before summer, students at Nicholson Elementary were treated to a day of fun and learning that had the students touring different rooms of the campus.

In each room was a different activity or competitive learning experience. Most of the rooms featured age appropriate robots that the students learned to operate with help from older children.

Gifted teacher Maureen Pollitz said the robots were funded by a $29,900 grant from the Mississippi Department of Education as part of a K-8 STEM initiative. She set up the day long event, held on Monday, to act as an introduction to the robots that will be used next year. To help, Pollitz enlisted the help of sixth graders, who were tasked with coding the robots.

The day also featured robot based competition such as a sumo wrestling event, races and a soccer based game.

In addition to being able to work with robots, the children also got to learn about their local soil composition and why it is important. They were also provided with small vegetable plants to bring home and grow. Pollitz said the plants will help the children learn about healthy eating. The plants were handed out at the school’s new outdoor classroom, which includes solar panels that power a nearby garden’s irrigation system. Pollitz said the school received an $18,000 grant to help fund that project, which includes a pergola.

In another station, Pollitz set up the heart of a sheep that had been dissected and displayed through a microscope. Pollitz said interest of that display was not very high.

Students also made a stop into the library where they heard from a representative of the Natural Museum of Science who brought a live baby alligator and gopher tortoise The representative also showed the students preserved specimens of a gulf sturgeon, bat, and other local animals, all in an effort to educate them on the importance of preserving wildlife.