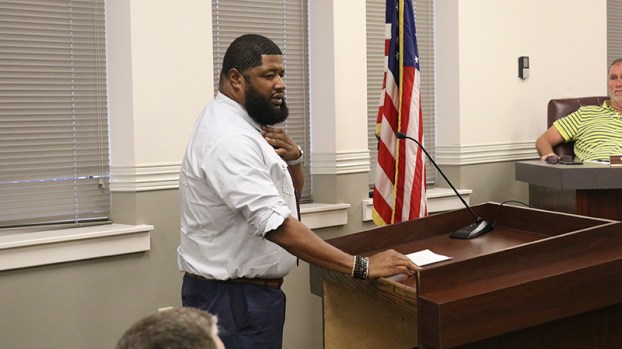 Lorenzo Breland, son of City Councilor Larry Breland, addressed the accusations made in a May 15 article that he was part of a conspiracy when he was selected as a juror in a trial that involved the city of Picayune. Photo by Jeremy Pittari

The son of  a Councilor who was part of the jury that ended in a mistrial spoke out to the City Council to state he did not have ill intent nor was he part of any conspiracy.

Lorenzo Breland, the son of Councilor Larry Breland, stood before the City Council during Tuesday’s meeting to state that he was not part of any conspiracy nor did anything illegal when he was called to serve as a juror for a case that involved a lawsuit between the city of Picayune and an architectural firm the city was suing due to flooding at the addition to City Hall.

Lorenzo, reading from a written statement, said that when he was called to serve on that jury, he was asked by the judge whether he could be impartial in the case, which he said he could.

“I did not conspire with Mr. Luke or anyone,” Breland said.

He said that the recent article published by the Item has tarnished his and his family’s good name in the community.

Lorenzo’s name was not published in that article, which ran on May 15.

Larry Breland, said that the article did not include all of the facts and wondered why no one on the legal counsel for the city spoke up when they noticed that Lorenzo had been selected for the 12 person jury the first day of court proceedings. Further he added that had the jury still had its alternate, whom had been dismissed at some point during the trial, the case could have proceeded. Larry Breland then read from document 242 in the case, which was included in a prior article by the Item published on April 19, online and April 21 in print, which states, “The Court met in chambers with all counsel and the juror, and questioned the juror. The Court finds the juror did not purposely fail to inform the court of that relationship. However, had this relationship been disclosed during voir dire, the Court would have, on its own motion, excused the juror for cause.”

Larry went on to say that his son was a victim of circumstance and reminded the Council of the good things he has done for the community, which include providing free football camps and free school supplies to children in Picayune. Both Brelands called for a retraction of the May 15 story.

Prior to Lorenzo addressing the Council, two members of the public asked why no one from the city spoke up when they realized Lorenzo had been selected for the jury.

Jacob Hickman said the fact that the case ended in a mistrial the way it did makes the city look bad. Samuel Hickman added that the outcome of the case could negatively affect future attempts at economic development when trying to attract companies to the area.

Jacob Hickman said that it appears as though there was either malicious intent on the part of the city, or incompetence.

“It does not take a lawyer to know that is a conflict of interest,” Jacob Hickman said.

He added that the more than $280,000 spent on legal representation that will never be returned could have been used by any of the city’s departments currently working on limited funding.

Both Hickmans said they did not mean ill will toward Lorenzo Breland, nor do they blame him for what happened, but came to Tuesday’s meeting to get answers from city representatives as to why no one from the city spoke up after he was selected.

“He didn’t select himself, he was just answering questions,” Jacob Hickman said about Lorenzo Breland.

Councilor Tammy Valente said a number of the Councilors did not go into the courtroom during the trial, so had no knowledge who had been selected to serve on the jury. She said the when she found out, “my head blew off.”

City Manager Jim Luke, who was accused of being “aware at all times that (Lorenzo Breland) was the son of a city councilor of Picayune,” in document 246 quoted in the May 15 story, said nothing during Tuesday’s meeting.

The Poplarville Board of Aldermen issued several payments for work done on the City Square Park during Tuesday’s meeting. The... read more