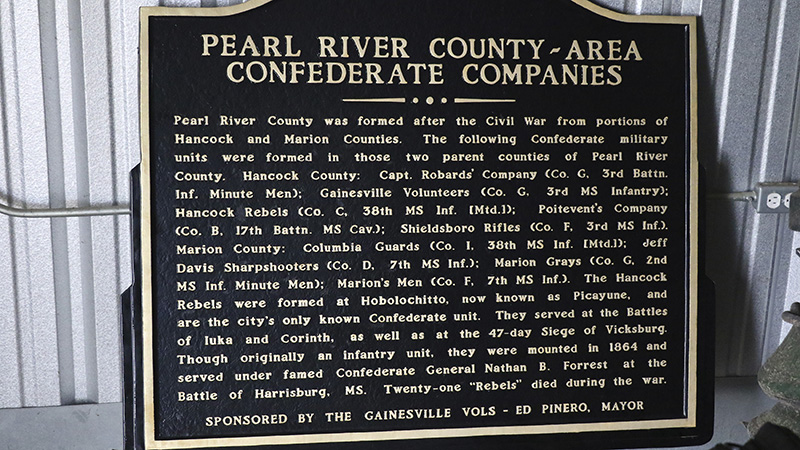 This sign allegedly donated to the city by the Gainesville Volunteers was removed from in front of the Intermodal Transportation Center in Picayune along Highway 11.

Three signs were recently removed from various points within the city of Picayune.

Two of the signs were at the entrances of Picayune along Sycamore Road and Memorial Boulevard on large displays that included small signs indicating the presence of various civic organizations or local services within the city. The signs that were removed represented the Sons of Confederate Veterans and included the Confederate battle flag.

A third sign previously located in front of the Intermodal Transportation Center on Highway 11, was also removed. It told the story of several confederate companies that served in the Civil War and was apparently donated by the Gainesville Volunteers. While the sign has Mayor Ed Pinero’s name on the bottom, Pinero said he does not recall the City Council authorizing the installation of the sign, nor approving his name being added to it.

Pinero also said he can’t find in the City Council’s minutes where a motion was approved for the sign at the Intermodal Center to be installed, which is why it was removed.

He added that the Sons of Confederate Veterans signs contains the Confederate battle symbol.

“I have a hard time thinking they will want to put the Confederate flag back up when they can buy something without that symbolism,” Pinero said.

For now the signs are stored in safe keeping by the city. Pinero said that if the Council can find in the minutes where a motion was approved to erect the Gainesville Volunteers sign, the Council will revisit the matter.