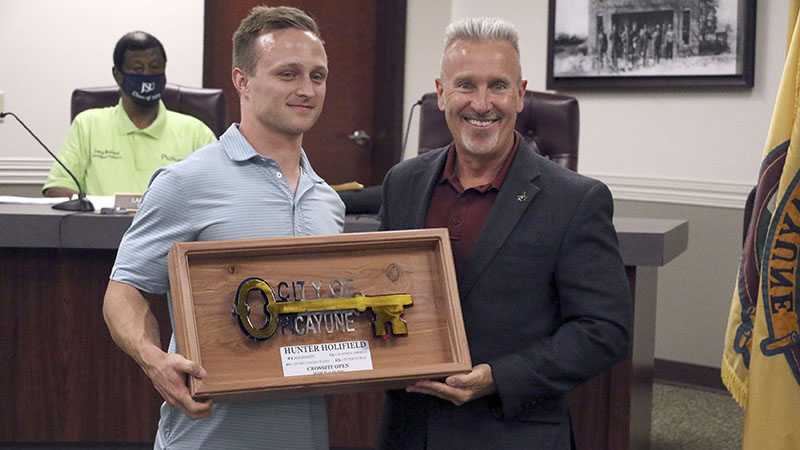 From left, Hunter Holifield accepts a key to the city of Picayune from Mayor Ed Pinero during Tuesday’s City Council meeting. Photo by Jeremy Pittari

Picayune’s City Council recognized the achievements of a local athlete before conducting drawings for two prizes raffled off to raise money to support the reconstruction of Kids Kingdom, the recently demolished playground at Friendship Park.

Hunter Holifield recently participated in a worldwide Crossfit competition, placing first in Mississippi, 15th in the North American continent, 10th in the United States and 23rd in the world, said Mayor Ed Pinero.

Pinero described Holifield as a polite individual who is willing to work with younger Crossfit participants. He will move on to the next round of the competition, the Mid-Atlantic Crossfit Challenge, set to take place in Knoxville Tennessee on May 28 through the 30th.

Pinero then presented Holifield with a key to the city set in a wooden frame.

For the past several weeks, tickets for two prizes have been sold by city employees and volunteers to raise money for Friendship Park’s recently demolished Kids Kingdom. Most of Kids Kingdom was demolished earlier this year because the wooden structure was rotting. Discussion of the playground needing repairs has been held by various Council members for the past several years, but efforts only gained traction this year, which is an election year.

Through the raffling of a two-bag crawfish cooker purchased by Picayune Police Chief Freddy Drennan and Pearl River County Sheriff David Allison, along with the raffling of a Yeti cooler donated by Phillips Building Supply, the effort raise a bit more than $13,000.

Drennan said the money will be used to help offset the cost of a $380,000 match the city will need to produce to receive $1.9 million in grant funding from the BP fund.

The winners were Jean Daigle, who won the Yeti cooler, and St. Michaels Foundation, winner of the crawfish cooker.