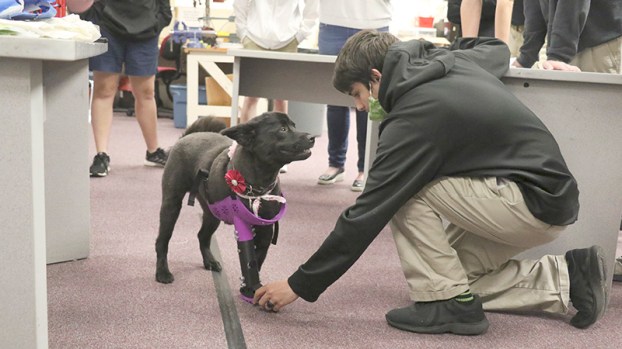 Bea, a three legged dog rescued from a hoarding situation in another state, was recently presented with a prosthetic leg designed by students in the Picayune School District Career and Technology Center. Photo by Jeremy Pittari

Bea gets new lease on life from students

A three legged dog was presented with a prosthetic leg designed by students who are part of the Picayune School District’s Career and Technology Center.

On May 14, the owners of the three legged dog named Bea, Venetia Gonzales and Brad Clements, brought their family member to the school so the students could test run the prosthesis and see if any adjustments were required.

The original plan was to have a final version completed before that visit, but the 3D printer overheated during the two-day printing process, resulting in an unfinished harness.

Instead the students presented the family with the second prototype until the final version with some comfort bearing alterations could be completed.

Before putting the prosthesis on Bea, the students took a moment to explain their design process to Bea’s owners.

Each student spent about five minutes describing their involvement in the creation of the 3D printed harness and leg, using some of the many prototypes as props. The prosthesis also included several prototypes of a wheel that could be used in place of the leg to allow Bea to run instead of walk.

Students have been working on this project since January, initially spending their time coming up with a project to complete. Once they came up with the idea to print a leg for their teacher’s neighbor, Gonzales, designing that prosthesis began.

Gonzales said that she was very appreciative of each student’s hard work on the project and feels the final product will help Bea lead a longer and more fulfilling life.

“I can tell you from the bottom of my heart, I am amazed,” Gonzales said. “What these kids did is beyond imaginative.”

Pearl River County’s Board of Supervisors will receive about $5 million in initial payment from state and local recovery funds,... read more