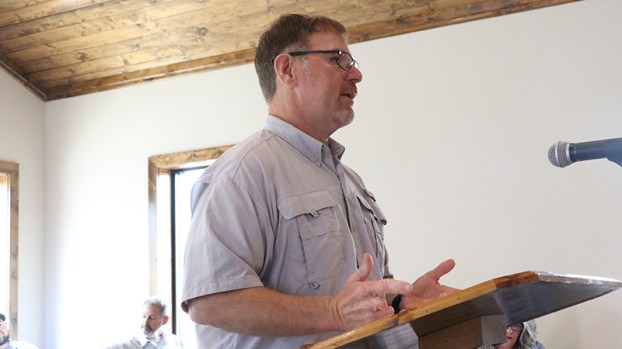 Jerry Bounds, Safety Director and Inventory Control Clerk for Pearl River County, explains to the Board of Supervisors that there is a need to have the claim on the fire at a county building reassessed since the square footage was incorrect. Photo by Jeremy Pittari

Pearl River County’s Board of Supervisors will receive about $5 million in initial payment from state and local recovery funds, and approved a motion to start forming a plan to take in some private roads that serve a number of houses.

County Administrator Adrain Lumpkin said the Board approved a motion to apply for up to $10.7 million, but will definitely get half of that funding soon.

He told the Board that due to the pandemic, applying for that funding has changed significantly. In the past applying for grant funding required filling out large amounts of physical paperwork. This time all he had to do was submit most of the required information electronically.

There are restrictions on how that money can be used, superficially for health care needs, such as building a new Health Department facility or adding health related aspects to an existing facility.

Alternately the funds could be used to help subsidize payroll. Lumpkin said if the funds are used to fund paying employees who work on the front lines, such as in the Sheriff’s Department or Emergency Operations Center, the money typically spent from the general fund to cover that expense can possibly be used elsewhere. Payroll expenses in those department typically totals $350,000 a month, so Lumpkin said those funds will be used quickly.

The amount of funding awarded was based on population, so Lumpkin said that is why it’s important for all residents to fill out Census forms when the count is held. This most recent round of funding was based off the 2010 Census.

In other business, the county is working with an insurance company to ensure the proper payout is made concerning the fire that occurred at the MSU Extension Service building back in April.

Jerry Bounds, Safety Director and Inventory Control Clerk, said that the adjuster who came to inspect he building rated it at 7,000 square feet, instead of the 12,000 square feet Bounds felt it should been measured at. In response a third party will come out and measure the square footage.

Concerning demolition of the building, Lumpkin said that if the county waits to hire a third party to tear it down as opposed to using in house labor, the insurance policy will cover the cost to hire an outside company.

Bounds said the policy included about $75,000 in contents coverage.

Private roads have been a topic of discussion as of late, especially concerning two roads in Hudson Holliday’s district.

During Wednesday’s meeting, he asked the rest of the Board to vote with him in creating some sort of method to take the worst and most populated private roads and add them to the county’s list of roads to maintain.

The discussion got a bit heated since any change in policy could lead to setting a precedent the county may not be able to afford.

Malcolm Perry expressed concern with starting such a procedure, especially since he has about 20 miles of private road he wish he could add to the county’s list, but he knows the county does not have the funding.

Holliday contended that he only wants to add the roads that are the worst off, and have the most houses on them. Two such roads, American Way and American Sand and Gravel, have been in a state of disrepair that at times prevents residents from leaving their homes.

Jason Spence said he can see both sides of this argument, but added that he also has a road in need of repair that has more than 30 homes along its mile long stretch.

After a lengthy discussion, the Board eventually voted 3-2, with Holliday, Donald Hart and Spence voting for and Sandy Kane Smith and Perry voting against, to start coming up with a uniform process to take in the worst roads with the most homes.

Lumpkin said that policy needs to find a happy medium between cost and benefit for the county.

Audy McCool and Michael McCool will have to serve their time for the shooting deaths of father and son Jason... read more