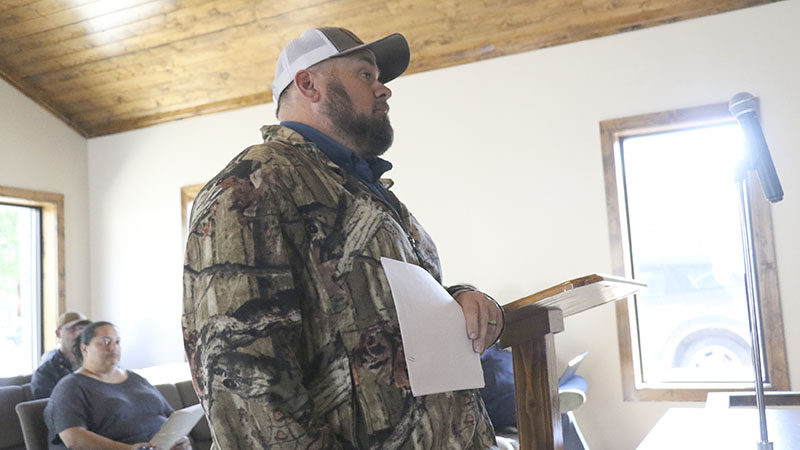 Road Manager Charlie Schielder updates the Board of Supervisors concerning two bids received for a large trailer. Due to delivery date commitments, the Board opted to accept a slightly higher bid. Photo by Jeremy Pittari

Pearl River County’s Board of Supervisors approved a motion to refinance two bonds totaling  $3 million for the Pearl River County Hospital and Nursing Home in an effort to save money on the interest payments.

County Administrator Adrain Lumpkin said there are two bonds that total $3 million, one will be refinanced at a rate of 1.7 percent, while the other will be get a new rate of 1.9 percent. Those changes in interest rates will save the county about $180,000 over the remaining 11 years left on the debt.

Troy Johnson with Butler Snow LLP said the change is essentially called a “Cinderella bond,” because it will eventually convert it to a tax exempt status.

In other business, the Board also approved a motion to go with a bid from Bullen’s Trailer Sales in Poplarville over a cheaper bid from Stringer’s Trailer Sales due to the fact Bullen’s provided a delivery date for the order. Lumpkin said the trailer in question is a 25 foot dovetail trailer used by dump trucks to haul backhoes. Even though Stringer’s Trailer Sales provided a quote that was $494 cheaper than Bullen’s quote, the Board opted to go with Bullen’s because the owner assured the Board that he could deliver the trailer in seven to nine weeks. Lumpkin said that Bullen’s builds the trailers on-site, whereas Stringer’s would have to order it from a manufacturer and as such was unable to provide a concrete delivery date. The quote from Bullen’s was for $13,990.

A grant from the Mississippi Department of Environmental Quality totaling $25,125 was accepted by the Board during Wednesday’s meeting. Lumpkin said the money will be set aside until another grant, anticipated to be available in the fall, can be acquired. He said he intends to combine those two grants together so the next time the county holds a hazardous waste collection day more material can be accepted. The last collection day lasted for an hour before the $20,000 in grant funding ran out, Lumpkin said. The grant requires a 25 percent match from the county.

Eddie Smith, Pearl River County Extension Agent for MSU Extension Service, updated the Board on efforts to relocate his office after a fire damaged the original location along Highway 11 earlier this month. His office is now located at the old tax office in Poplarville off of Main Street. Smith said he and other staff are still salvaging what they can from the fire, but a lot of stuff suffered smoke or water damage. In spite of that hurdle, the office will still offer well water testing soon, and is still accepting soil samples for testing.

The free well water testing event will be held from April 19 until May 12. Anyone who has a private well who wants to have that water tested during that time for ecoli and coliform bacteria should register by visiting the Extension Center’s website at extension.msstate.edu. Residents can also register by calling 662-325-1788.

The Board also heard about how use of the county’s new consolidated dispatch center is helping lessen response times and keep law enforcement personnel safe. Carey Meitzler said the new system allows dispatchers to see where patrol cars are relative to the next call, allowing them to dispatch the closest officer or deputy. Being able to know an officer’s location can also help them find the location of someone who needs help but may not be visible from the road, such as if a vehicle has left the interstate and come to rest deep in an embankment.

Additionally, the system includes reminders to help dispatchers remember to check on officers while they are out on a call.

To help alleviate dead spots with the dispatch radios, all vehicles are getting mobile radios installed, which are more reliable than the handheld models. That change should provide the officers and deputies with 95 percent coverage. Meitzler said that if the state can install one more tower to the MSWIN system in Pearl River County, that will go a long way to alleviating the remaining dead spots.