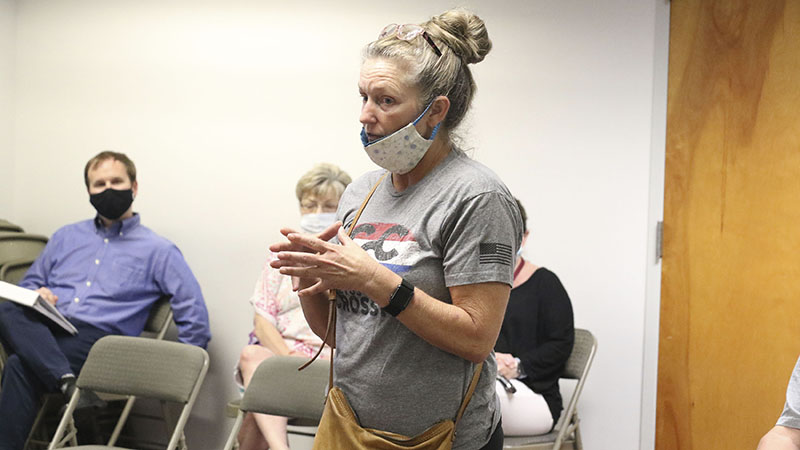 Sarah Oldmixon, owner of Miss Sarah’s School of Dance, addressed the Picayune School District’s Board of Trustees to ask if the auditorium would be available for rent. While the Board decided to reopen the facility for rent, a fee increase was also approved, putting the venue out of Oldmixon’s financial reach to rent for her upcoming dance recital. Photo by Jeremy Pittari

Picayune School District’s Board of Trustees approved a motion to adjust the rental fees for the auditorium, inciting some ire from those who previously held events at the venue.

Sarah Oldmixon, owner and operator of Miss Sarah’s School of Dance, said she has been holding dance recitals at the auditorium for decades. In the past 17 years, she’s noticed that the facility is in dire need of some maintenance and updates.

But that was not what brought Oldmixon to last week’s meeting. Due to the closures of schools last year because of the pandemic, she had to hold last year’s recital in Bay St. Louis.

This year, she asked if the facility would be reopened. While consideration was being made to reopen the auditorium, she was alerted to the fact the school district was considering a rate increase.

Board member David Mooneyhan said the Board would take her concerns about the need to update the facility into consideration, and confirmed the district planned to open the venue back up for rental, but could not elaborate more at that time since an official decision had not been made by that point in the meeting.

By the end of the meeting, the Board approved a motion to adjust the rates. Before making that motion, Board President Frank Ford asked why the district was suggesting such a large increase in fees. Matt Lee, the district’s Fixed Asset Manager, said the increase is by about 60 percent, going from $600 to $1,000 for the first 8 hours to rent the facility. Lee said the last increase was made about 10 years ago.

But Oldmixon says other fees have been added as well, significantly increasing her cost to use that venue.

For comparison, she said it cost her $1,250 to rent the venue, not including the security fee, and an additional expense light and sound technician due to subpar equipment in the auditorium. The previous rental expense included $600 to rent the facility for the performance day, $300 to hold a rehearsal day there, $300 for cleaning fees, $50 to open the back dressing room and a $500 deposit. She typically paid $500 directly to the officers working security during those times.

With the new fees and increases, she estimates that cost will increase to $4,920, and that does not include the cost to cover security and the light and sound technician.

Some the extra fees are derived from the need to have two janitorial staff on site, the extra time needed to rent the facility beyond the initial 8 hours allotted in the base fee, and a new requirement for the renter to secure their own company to come in after the event to fumigate the facility, another additional cost not included in her estimate.

According to a copy of the contract provided to Oldmixon by the Picayune School District, the initial $1,000 fee covers rental of the facility for up to 8 hours. Every hour after that is an additional $125. A security deposit is also required, and the business owner in question must show proof of liability insurance. Any security fees, totaling $30 per hour per officer, are paid directly to the officer.

Lee said some of the increases were needed to not only cover the cost of utilities and increase in cleaning supplies (up to $300), but also the extra janitorial staff needed to meet COVID-19 standards. Oldmixon said she was informed she would need to have at least two janitorial staff on hand, doubling the cost of $25 per hour for each janitor. Lee said the additional staff is needed due to the pandemic.

Oldmixon contends the janitorial staff don’t do much, especially since food and drink are not allowed in the auditorium. Representative Stacey Wilkes said the move by the district will only lead to less events being held at the auditorium, eventually affecting the businesses that benefit from the extra people in town.

“Why would anyone pay to rent a Prius at an Escalade price?” Oldmixon said.

So, instead of bringing the dance recital back to the auditorium so parents don’t have to drive a long distance to attend the event, Oldmixon will hold it in Bay St. Louis again this year. The year after that, she plans to move the event to another venue, possibly in Petal.