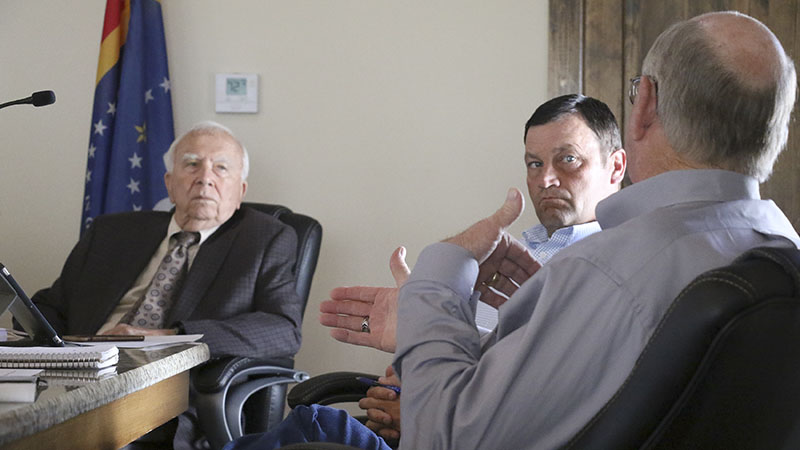 Community complaints from tax payers concerning the lack of road maintenance along roads that are considered private led some members of the Board of Supervisors to consider some method that could legally be used to help those tax payers.

The Democrat has previously received complaints from residents down American Way, a private dirt road off of Liberty Road. Those residents state that the road suffers from washouts and other issues when water line repairs are conducted.

The most recent pictures sent to the Democrat by residents along the dirt road show a washout where large boards had to be installed over the washout to create a somewhat passable area of the road.

District III Supervisor Hudson Holliday said he too has received complaints from resident on that, and other private roads.

Typically, the county does not accept a private road until it has been brought up to the county’s standards. However, Holliday said there are more than 400 miles of private roads in this county, and to accept one such road would create a precedent where the county would have to accept all private roads.

While Holliday also wants to avoid adding unfinished subdivision roads to the county’s list of infrastructure to maintain, he said he is tired of having to tell residents who live down private roads that there is nothing he can do to help them.

This is especially true of those roads where there is only one way in or out, a problem compounded when it involves senior citizens who can’t maintain the roads themselves or have a proper vehicle to navigate rough terrain.

“If we want the county to grow, we can’t let people stay stranded on these roads,” Holliday said.

Board President Sandy Kane Smith agrees that developers need to finish roads before the county will accept them for future maintenance, but suggested offering advice to private road owners on how to fix drainage issues that might make their dirt roads passable for longer.

Holliday said he has some ideas as to how residents along American Way can address washouts, such as the installation of culverts and ditches in key areas.

Board attorney Joe Montgomery suggested the county provide a one time fix at the property owner’s expense using county staff and equipment.

No motion was made on the matter before the Board moved on to other topics.