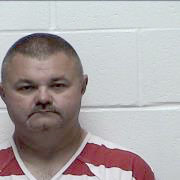 A Nicholson man was arrested for exploitation of a child this week by the Pearl River County Sheriff’s Department.

The case started with a complaint from the father of a 13-year-old female juvenile who found that his daughter was having conversations that were sexual in nature with an adult male, said Maj. Mac Ogden with the Pearl River County Sheriff’s Department.

During the ensuing investigation, it was determined that the man was possibly having similar conversations with three other juveniles, also about 13 years of age.

Through that investigation, 42-year-old Randolph Burge of 63A Davis Dawsey Rd., was identified as a possible suspect.

Investigative techniques and an interview with Burge gathered enough evidence to arrest Burge on the offense of exploitation of a child on Thursday, Ogden said.

The investigation is ongoing, and Ogden said that additional charges could be pressed against Burge at a later date.

According to previous coverage, Burge is the chief of the Nicholson Volunteer Fire Department and agendas from the Pearl River County Utility Authority show is he is that agency’s field operations manager.

Ogden would like to remind parents of all teens that they should monitor their son’s and daughter’s social media accounts and their cellphone usage to protect them from potential exposure to adults who may be have ill intentions.

“These sites are dangerous for children because there are predators out there,” Ogden said.