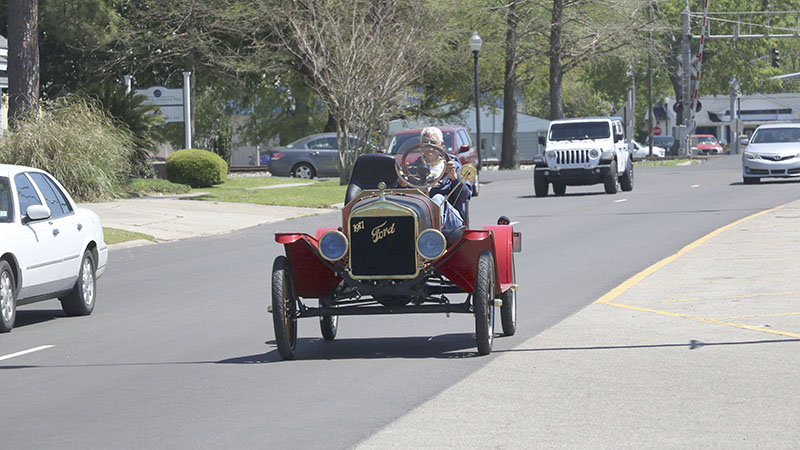 When Fred Smallwood takes his 1917 Ford Model T for a drive through town, it stands out amongst the more modern cars. Photo by Jeremy Pittari

On warm sunny days motorists in Picayune may see a bit of the past traveling down the downtown area in the form of a vehicle that is more than 100 years old.

Fred Smallwood is a self professed lover of things powered by motors. His collection includes a 1954 Harley Davidson motorcycle, Cushman motor scooters, a 1955 Thunderbird and his most recent purchase, a 1917 Ford Model T with the speedster body planted on the frame.

For the past year and a half, Smallwood has been working on his new toy, reworking the engine and other parts to get the historic vehicle roadworthy. He said he purchased the vehicle from a gentleman who lives up north, and had his neighbor, who transports vehicles across the country, bring it to him in Picayune. It took about six months to get the vehicle running correctly, but now that it does Smallwood takes it out for rides in the town.

“I can’t keep my hands off it of course,” Smallwood said.

While he may have had to rebuild the dash with less than authentic parts, one thing he did not update was the starter. He jovially calls it an “armstrong” starter.

“Because you have to have a strong arm to start it,” Smallwood said.

Before the days of electric starters kicked off by the simple turn of a key or push of a button, motorists had to crank the starter by hand. Smallwood’s Model T still requires that bit of elbow grease before he can take it for a ride.

Lucky for him the small engine does not have a high compression ratio, so he said it’s not that difficult to turn over.

One aspect of the vehicle many may not know is that he can run the engine on nearly any fuel. From diesel to kerosene, the Ford Model T employed a multi fuel engine, the first of its kind.

The aftermarket bright red topless body on the historic vehicle may make the vehicle look like it can hit high speeds, but Smallwood said the top speed is about 40 miles per hour.

When he needs to conduct repairs, Smallwood said many of the parts can be found in fields, or via a company that makes reproduction parts.

He also doesn’t worry much about his vintage vehicle being pilfered, since operation is very different than cars on the road today, even those with a manual transmission. While there are three pedals, including a clutch and brake, the third pedal has a much different use than most people would guess. With the gas on the steering column, the third pedal is used to make the vehicle travel in reverse. Equipped with a two speed planetary transmission, the process to shift gears is a bit more complicated than today’s manual transmission vehicles.

It’s even planted on the original wood spoke wheels with reproduction tires that say “non-skid” on the traction surface. At 78-years-old, Smallwood said he has no plans to sell the vehicle, but does like to display it at car shows or just take it for joy rides.