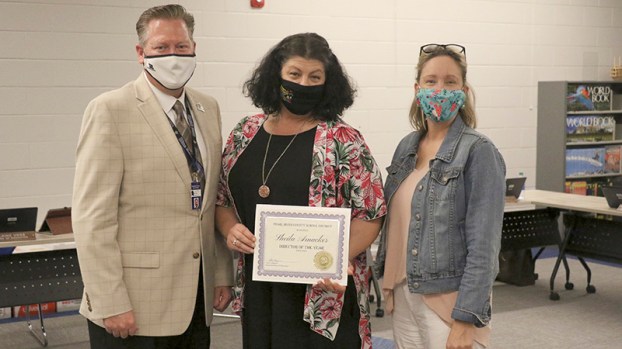 Sheila Amacker, center, was recognized as the Pearl River County School District’s Director of the Year. He is pictured with, from left, Superintendent Alan Lumpkin and Board President Elaine Voss. Photo by Jeremy Pittari 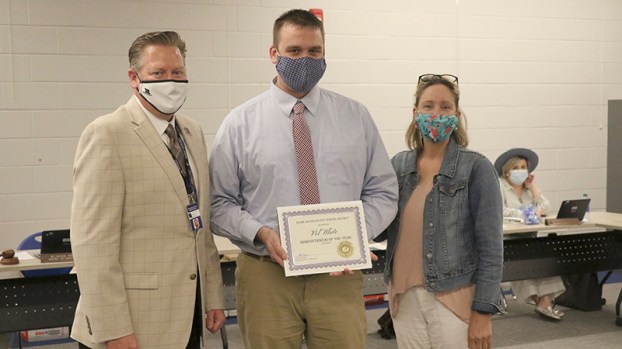 Vol White, center, was recognized as the Pearl River County School District’s Administrator of the Year. He is pictured with, from left, Superintendent Alan Lumpkin and Board President Elaine Voss. Photo by Jeremy Pittari

A new reporting system via a smartphone application is helping students deal with depression and other life issues, while a vape sensor at the high school campus appears to work so well it can pick up a woods fire nearby.

During Thursday’s meeting of the Pearl River County School District Board of Trustees, several counselors spoke to the Board about how a new application is helping students.

Denise Rouse, the counselor at the Middle School campus, said the app can help students with depression or those having issues with school work connect with someone who can help. She said that 21 students at the campus are using the app, and so far she has seen improvements in their grades and has helped decrease attendance issues.

At the Endeavor School, all 31 students enrolled are participating in the app. Endeavor School counselor Paula Russell said it appears that all students at the campus are benefitting from the app. Superintendent Alan Lumpkin added that Pearl River County School District is one of the few in the state to employ counselors since it is not mandated by the Mississippi Department of Education.

Vape detectors at the high school have been installed in the restrooms, which alert administrative staff to the presence of various kinds of smoke. Pearl River Central High School Principal Kim Alford said the sensors are working well, alerting staff to students using vape products on a daily basis.

The sensors work so well Alford said she got alerts on a Sunday, which turned out to be due to a woods fire that occurred nearby.

On the construction side of things, Business Manager Thomas “T.J.” Burleson said that work on the new auditorium near the high school is going well, with roofing planned to be installed this week.

The design and planning stage of the central office, which will occupy a historic building at the Elementary campus, is about to start. Burleson expects the district to be able to apply for a grant due to the building’s historic nature. He said the building was constructed in the 1920s.

The district is also in process of implementing a new emergency alert system district-wide. Every staff member will be assigned a special badge that can communicate with a wireless system via a button. If that button on the badge is pushed three times, the administration and the district’s school resource officers will be alerted that a situation is occurring within a specific classroom, such as a fight between students. Those personnel will receive information pertaining to the campus and location of the classroom.

If the button is pushed eight or more times, it would indicate that a serious situation has occurred, such as an active shooter, putting the entire campus on lock down and causing lights to strobe in the hallways. Cameras tied to the system will focus on the part of campus where the alert was activated and 911 will be called automatically.

Burleson said the district will advertise for the installation of the system and start a reverse bidding process shortly there after. The grant that will pay for this system requires the district to match 25 percent of the cost.

This year’s Director of the Year is Sheila Amacker, who is the director of food services. She was described as being passionate about her staff and being a welcoming presence to students. Lumpkin said she was instrumental in creating fresh salads and a pizza bar for the students to enjoy.

This year’s Administrator of the Year is Vol White, who is the director of the Endeavor School. He was described as having a strong impact on the lives of his students and employing a positive demeanor that can change a staff member or student’s bad day into a good one.