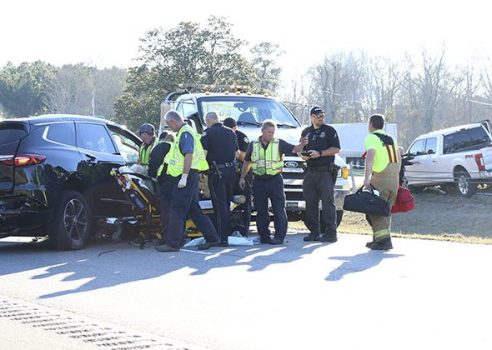 EMS personnel and firefighters tend to an occupant of a second collision that occurred Wednesday afternoon near the weigh station on Interstate 59. Photo by Jeremy Pittari 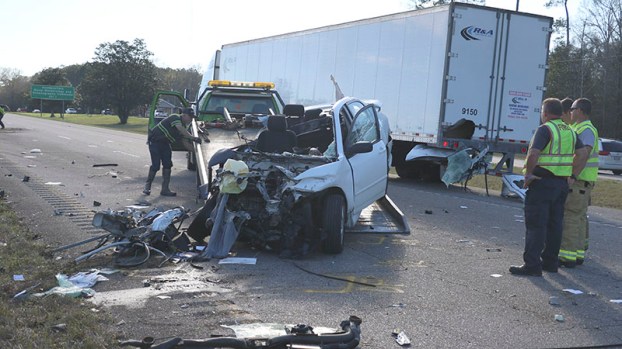 This vehicle sustained major damage after colliding with the rear of an 18-wheeler Wednesday afternoon, causing traffic to slow in the south bound lane of Interstate 59. Photo by Jeremy Pittari

Two collisions near the weigh station along Interstate 59 in Pearl River County snarled traffic in the north and south bound lanes Wednesday afternoon.

Capt. James Bolton said the first collision occurred at about 3:15 p.m. in the south bound lane when an 18-wheeler slowed suddenly so it could turn into the weigh station. At that time, a white sedan following behind collided with the rear of the 18-wheeler and was then impacted by a pickup truck.

After being extricated from the vehicle by emergency responders, the driver of the white sedan was transported to an area hospital for treatment of non-life threatening injuries which included a broken arm. No other injuries were reported in that collision, Bolton said.

Apparently a black pickup truck in the right hand lane pulled into the left lane in front of a black Buick SUV, forcing the driver of the vehicle to leave the road on the left hand side into the path of the tow truck. After striking the tow truck, the Buick was struck by a black Cadillac sedan following behind, causing the Buick to roll over twice in the middle of the road.

Two people inside the Buick SUV suffered minor injuries, as did the man in the Cadillac, Bolton said. The pickup truck did not stop after the collision occurred.

No fatalities were reported in either collision, but traffic was snarled for at least an hour in both directions.