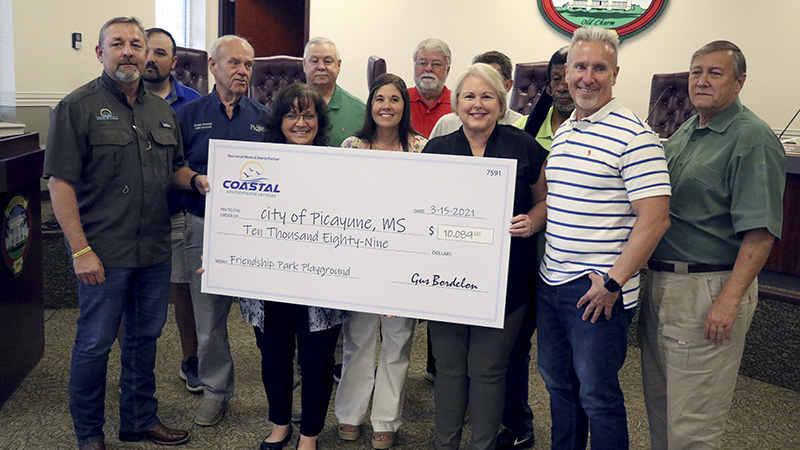 RAISING FUNDS: Gus Bordelon, pictured at far left, donated more than $10,000 to the city of PIcayune for use in the construction of new playground equipment at Friendship Park. Bordelon is the owner of Coastal Waste Services. Photo by Jeremy Pittari

A donation worth a bit more than $10,000 was accepted by Picayune’s City Council Tuesday evening for use in the construction of a new playground at Friendship Park.

Coastal Waste Services Owner Gus Bordelon presented the city with a check worth $10,089 for the construction of the new playground. He said that when his company began providing service to the city his intention was to be the “best corporate citizen we could be.”

Police Chief Freddy Drennan, who is heading up a committee to solicit the donations, said he has received verbal commitments for additional donations that he plans to have in writing before the next Council meeting.

The Council also heard about a plan to add school zone flashers near the intersection of Highway 43 North and Richardson Road.

Public Works Director Eric Morris said the flashers and signs are being installed to address vehicle collisions that have been occurring in that area. Heritage Christian Academy is located at that intersection. He hopes to have the devices installed in the next few weeks.