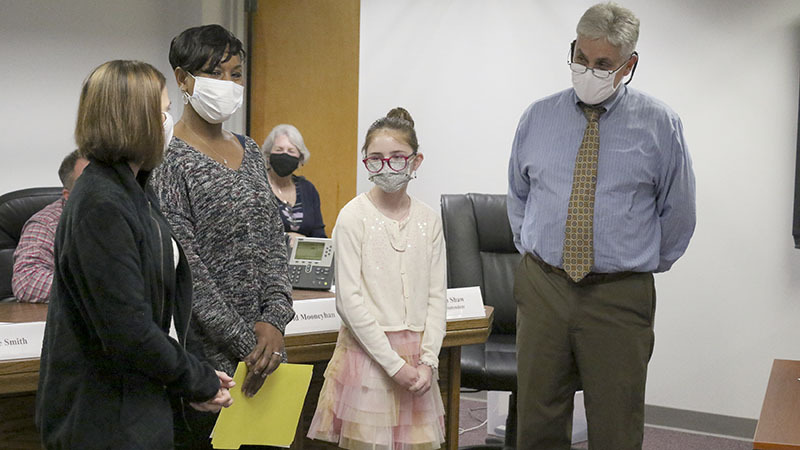 Cailyn Burge, center, was recognized for winning the county spelling bee by beating an eight grader. The six grade South Side Upper Elementary student will now move on to the state competition. Photo by Jeremy Pittari

Cailyn Burge, a sixth grade student at South Side Upper Elementary was recognized by the Picayune School District Board of Trustees for winning the county spelling bee.

Superintendent Dean Shaw said Burge even beat out an eighth grader to take the title, with the winning word being “boulderdash.”

In other business, the Board accepted several bids for old kitchen equipment. Most of the winning bids went to Fortenberry’s Slaughter House for eight items totaling $2,324.85. The items ranged from a mixer, slicer, ovens and a six compartment sink.

The district was also approved to receive grant funding from Mississippi Community Oriented Policing Services in Schools. Chris Wagner, chief of police for the school district, said the grant includes $10,000 for each of the six officers at the district, which can be used for any expense to supplement his budget. The district became eligible to apply for the grant after moving security services from the city of Picayune to in house about a year ago.