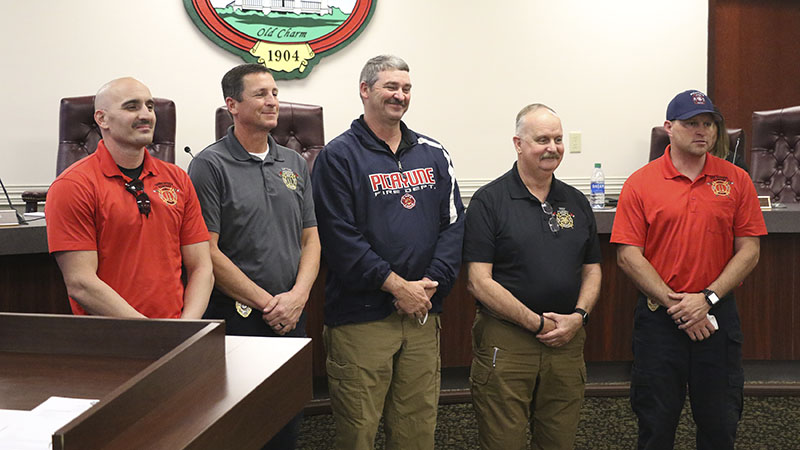 With the retirement of two people in top positions of the Picayune Fire Department last year, promotions within the department were announced during Tuesday’s City Council meeting.

Weaver is a New Orleans native who moved to Picayune when he was young. He and his wife Debbie have three adult children and five grandchildren.

He is an active member of Roseland Park Baptist Church, and started his career working offshore shortly after graduating from high school.

After becoming the youngest driller in the North Sea, he worked across the world and reached the rank of rig manager before leaving that line of work. Weaver and his wife opened several small businesses, one of which is still in operation today, the Skate Station.

Weaver joined the fire department in 1996 under the leadership of then Fire Chief Jackie Mitchell. He graduated from the state fire academy with the highest GPA of his class, and became a certified smoke diver at the age of 40.

As fire marshal, he became a certified fire inspector, fire plans examiner and fire investigator and an arson dog handler in 2008, caring for Joanie the arson dog until her retirement and subsequent replacement with Izzy.

Reynolds started his firefighting career in 1993, and later promoted to Lieutenant in 2004. In 2015 he was promoted to captain and took over the responsibilities of battalion chief.

He and his wife Leslie have four children and six grandchildren.

Mitchell began as a part time fire fighter in 1996 until joining full time in 2001. In 2003 he was named the city’s Firefighter of the Year.

He is a certified smoke diver, hazmat technician and has certifications in rope rescue, confined spaces and driver operator.

In 2017 he was promoted to lieutenant and a year later became a captain within the department’s ranks. He and his wife, Antha, have two children and two grandchildren.

He left the department in 2014 to take a position as an instructor with the Mississippi Fire Academy until he returned in 2018 as the Picayune Fire Department’s training officer. Abercrombie is cited as being essential in the department receiving a $40,000 grant that was used to purchase fire equipment recently.

Lossett joined the department in 1999 and in his first year became a certified smoke diver, accredited fire instructor and accredited fire apparatus driver/operator. The Sons of the American Revolution awarded him with the Fire Safety Commendation Award in 2006 and in 2008 the Greater Picayune Area Chamber of Commerce named him Firefighter of the Year.

He was described as being willing to help younger members of the department by passing on his experience. He and his wife Lauren have three children.

Second round of COVID-19 vaccines start at local long…