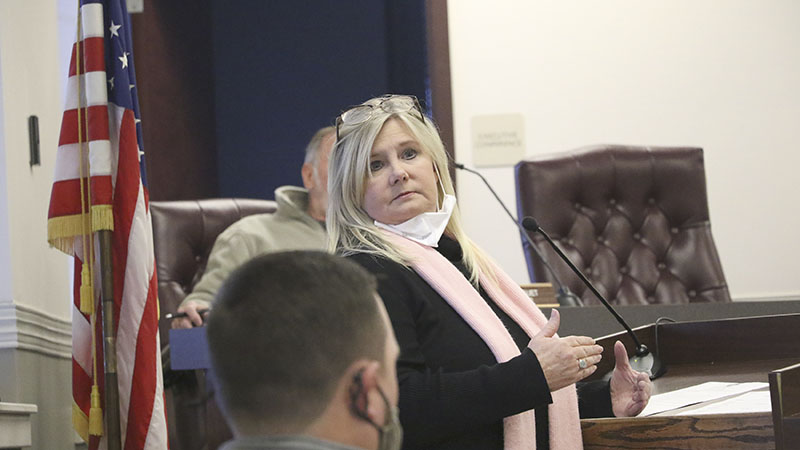 Representative Stacey Wilkes speaks to the City Council about a bill the Legislature is working on to allow golf carts on certain streets in municipalities across the state, including Picayune. Photo by Jeremy Pittari

Golf carts could soon be seen traversing the streets within certain areas of the city of Picayune.

That possibility comes after Tuesday’s motion by the City Council to approve a resolution that would allow “low speed vehicles and golf carts” to use public roads.

Representative Stacey Wilkes gave the Council an overview of the proposed change, which is being considered as a statewide move by the Legislature. The resolution was provided to the Council by Wilkes based off of a sample bill.

Tuesday’s approval of the resolution does not mean golf carts can be used anytime soon within the city limits. Wilkes said she still needs to bring the resolution before a committee within the House of Representatives. Additionally, the Council needs to put its own rules and regulations in place that relate specifically to Picayune.

However, the sample bill used to create the resolution states that applicable vehicles must not be capable of exceeding 25 miles per hour. Also, the golf carts need to be street legal by containing all regular road going safety equipment, such as head lights, brake lights, seatbelts, side markers, windshield and parking brake to name a few.

The Council can add as many additional restrictions as it sees fit, but can not make the rules less stringent, Wilkes said.

Tom Milar, the city’s code enforcement officer who is also on Picayune Main Street’s Board of Directors, said Picayune Main Street Inc. has been considering asking for a similar change to the city’s ordinances, but specifically for weekends and events and usage of those vehicles would have been restricted to the historic downtown area.

Picayune Police Chief Freddy Dreannan said he is concerned about the change for the public’s safety, so he asked the Council to closely review the streets and areas within Picayune where this could be allowed. As a resident of Diamondhead, Drennan has noticed that the roads in that Hancock County subdivision are specifically designed to allow for low speed vehicle traffic and typical vehicles, whereas Picayune has no such capability.

Other stipulations include the operator being licensed to operate a motor vehicle in this state, the golf cart or other such approved vehicle is insured and it has to have a vehicle identification number.

Drennan, Mayor Ed Pinero and some Councilors expressed concern with the vague wording in the resolution, specifically “low speed vehicle.” Milar said discussions by Main Street specifically excluded four wheelers and side by side ATVs.

Wilkes said she was asking for the resolution to be signed Tuesday so she could bring it back to the Legislature before an impending deadline. Any additional restrictions or terminology changes the city would like to make can be made at a later date.

Councilor Tammy Valente added that if a home owner’s association already has restrictions in place against the use of golf carts, those restrictions will override any decision by the Council to allow golf carts.

The motion was eventually approved unanimously.