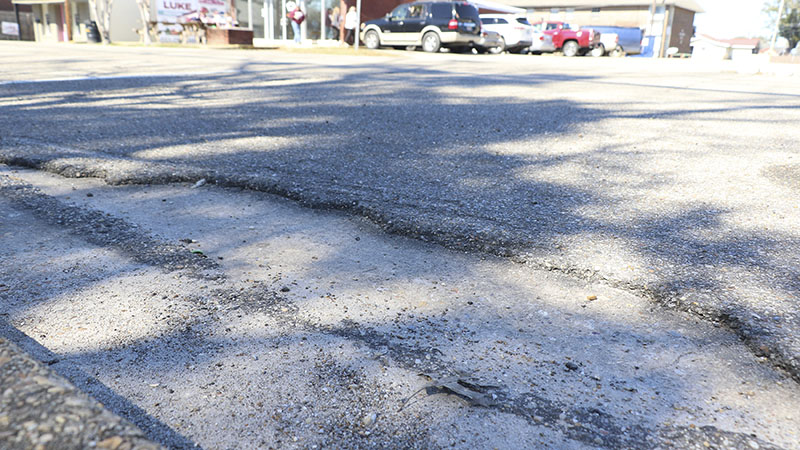 TWO SURFACES: Engineers discovered that East and West Canal Streets have a layer of concrete underneath the asphalt, creating a situation where a sealant would be needed when a new layer of asphalt is installed as part of the citywide paving project. Photo by Jeremy Pittari

Revisions to an abatement program within the city of Picayune were approved by the City Council, along with a change to the citywide paving project.

Since 2002 the city of Picayune has offered an abatement program that forgives a portion of a business’ ad valorem taxes based on the amount of money invested into the structure’s improvements. The minimum spent on the improvements to qualify for the program was $50,000, and there were several other caveats that appear to have stifled participation in the program.

Recently, Pearl River County Economic Development District Director Blaine LaFontaine reviewed the aging program and came up with two major changes, lowering the minimum to $25,000 and changing wording in the text so residential aspects of that building did not need to be on an upper floor.

Tuesday, the City Council approved a motion to accept those changes.

“We’re not trying to reinvent the wheel, we just want to improve the program that already exists,” LaFontaine said.

While conducting repairs to city streets as part of the citywide paving project, Jonathan Hickman said crews came to the determination that concrete makes up subsurface under the asphalt on East and West Canal Streets. Since concrete does not expand and contract due to seasonal temperature changes like asphalt does, Hickman proposed cutting the top layer of asphalt to line up with each of the joints in the concrete and install a flexible sealant at those joints to keep water and debris out. It will cost the city an extra $31,000, but since the price of asphalt is currently five percent less than budgeted, there is a some wiggle room with funding. The Council approved that change order.

The Council also approved a change to the city’s street repair policy as it pertains to asphalt cutouts to repair underground utility lines. Public Works Director Eric Morris said the changes were made to ensure the patches hold up better than in the past. The changes include several extra steps, which are now required by any agency making utility line repairs that require cutting into the street.

Morris also presented a matter before the Council pertaining to an apprenticeship program from the Mississippi Rural Water Association for an existing employee. The two-year program prepares candidates to take the water operator test and requires the city to provide a .50 raise in pay to that employee every six months. Councilor Tammy Valente asked if the city has a policy in place to give the employee a reason to maintain employment with the city after completing the program. Morris said that while there is no such policy, he feels the low cost of the program and the experience the employee will gain will be worth the extra $2 in hourly pay the city will receive after he completes the program.

The next Council meeting will be held on March 2 at 5 p.m. in City Hall.