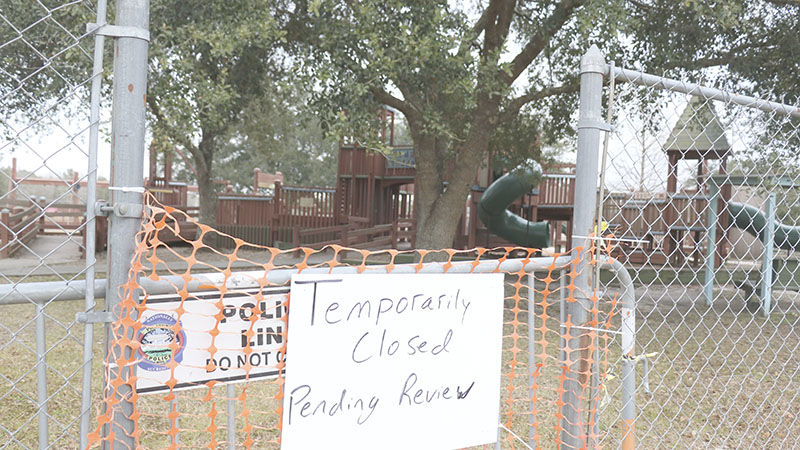 CLOSED FOR DEMOLITION: After years of discussion, moves are finally being made to demolish and rebuild the aging Kids Kingdom playground at Friendship Park. The wooden structure is said to have been suffering from years of rot for at least three years. The feature was open earlier this month, but this week these signs were found at each entrance to the playground. Photo by Jeremy Pittari

The long standing topic of the need to replace a rotting playground at Friendship Park was brought to the forefront once again, this time by Picayune’s city manager, who announced his bid to run for mayor weeks prior.

Conducting necessary repairs to the rotting wood making up Kids Kingdom has been a topic of discussion for years, but took the forefront during Tuesday’s City Council meeting when City Manager Jim Luke asked to speak about the matter to unveil a plan to fundraise to rebuild that structure.

Before that matter was discussed, the Council approved a motion to demolish the most dilapidated portions of Kids Kingdom. The demolition will equate to the removal of about 75 percent of the mostly wooden structure, said Public Works Director Eric Morris.

The remaining 25 percent will remain, entailing two swing sets at the north and southeast corners of the playground and two slides, one of which will require the construction of supports after the majority of the playground is torn down.

A handicapped swing on the grounds is structurally sound and will remain.

Morris said the need for the demolition was determined after he and Code Enforcement Officer Tom Milar inspected the playground separately and both came to the same conclusion, the structure needs to be torn down.

Prior to discussion of the matter concerning fundraising for the construction of a new playground, Luke asked to say a few words.

Luke then stepped down to the audience, pulled a red life preserver from a black plastic bag and called Police Chief Freddy Drennan to the front of the Council chambers to unveil his plan. Luke said he appointed Drennan as chair of a newly established committee to seek community donations to build a new playground. The plan is to build the new playground on the concrete pad that used to be Friendship Park’s tennis courts. The playground will be built in phases as funds are collected from those donations. Morris estimates the total cost for that playground to be $600,000, saying it will be built out of steel and include a fall safe surface over the concrete.

Luke then unveiled the name of the fundraising effort, “Have a Heart, Help Save Our Park.” He then held up the life preserver displaying that moniker and showed it to the Council before posing for pictures taken by a city employee.

Luke’s new fundraising effort comes weeks after officially announcing his bid to run for mayor, and years after discussions of this same issue have been conducted by at least two members of the Council, one of which who is also running for mayor. During the April 17, 2018 meeting, discussion about applying for grant funding for three parks other than Friendship Park was held. Councilor Wayne Gouguet and Councilor Tammy Valente voted against applying for those grants, causing it to fail and creating a situation where Councilor Larry Breland claimed the other Councilors were creating division within its ranks.

During that meeting, Gouguet said he voted against the matter because he felt work was also needed at Friendship Park, specifically to Kids Kingdom.

Later in that same year, Councilor Tammy Valente, who is also currently running for mayor, asked to put the need to raise funds to repair Kids Kingdom on the agenda for a meeting scheduled on the second Tuesday in May of 2018. Prior to that meeting, Luke unintentionally left a voicemail on Valente’s cellphone stating he wanted to record a conversation between the two deterring her from putting the matter on the agenda. During that meeting in May 2018, Gouguet called Luke out, asking if he has been recording conversations he has with Councilors. Luke did not respond that day, but during the June 6, 2018 meeting of the Council, Luke stood before those in attendance and said the phone call in question was made in an effort to reach Valente to dissuade her from putting Kids Kingdom on the agenda to avoid causing division between the Councilors. He then went on to admit that he intended to record that conversation because he did not trust Valente on either a personal or business level.

The topic of raising funds to replace Kids Kingdom did not reappear on the agenda until Tuesday’s meeting, however during a Jan. 24, 2020 meeting a motion to approve a “request for permission to explore, investigate, and design a plan for upgrades to Friendship Park,” was tabled after Breland contested the motion, saying it should include all parks. While the matter was tabled, Parks and Recreation Director Trevor Adam gave a presentation outlining a number of necessary repairs to Friendship Park, one of which included rot at Kids Kingdom.

During the Jan. 19 2021, meeting of the Council, a motion to move forward with fundraising efforts for Kids Kingdom under Luke’s plan was approved, unanimously.

“I am happy that we are moving forward on Kids Kingdom, but I feel like we had the resources to do this all along. A few colleagues and I have been pushing for it for years, and it’s a shame that it took an election year to finally get it done,” Valente said after the meeting. “We should be good stewards of the tax payer dollars every day, every year, not just election year.”

Councilor Jan Miller Stevens said she is glad that Drennan is heading up the committee and sees “great things in the future for the park.”