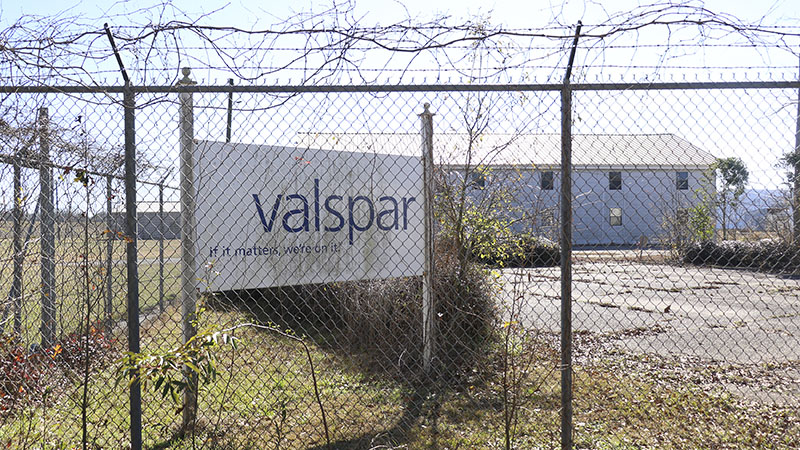 ON THE MARKET: This property at the end of Crosby Street has been for sale for about a decade. It has played home to various companies for about 70 years, most of which used hazardous chemicals in the production of various products. Currently, the city of Picayune is considering accepting the property as a donation, but no testing has been done to determine if the site or the soil underneath is contaminated. Photo by Jeremy Pittari

Picayune’s City Council is allegedly considering taking ownership of a now vacant industrial site that may be contaminated, which is also near an old Superfund site.

According to a social media post by current Councilor Tammy Valente, who is running for mayor in this year’s election, “the top administration within the city has been pushing for over a year for us to vote to take over the old Valspar plant.”

The matter is listed on Tuesday’s upcoming Council meeting agenda, set for Feb. 2 at 5 p.m. in City Hall.

When the Item contacted Luke for comment, he said he declined to comment on matters that were discussed during a closed session earlier this week. Luke is also running for mayor this year.

Valente and Councilor Wayne Gouguet are against the city taking ownership of the site until testing can be done to determine if contamination is present.

The property in question is adjacent to a Superfund site located between Palestine Road and Rosa Street. The Superfund site was cleaned by the Environmental Protection Agency due to creosote contamination. Cleanup of that site took years to complete.

According to a phase I site assessment report conducted on the old Valspar property in Sept. of 2020, the property in question is located at 210 Crosby Street in the city limits, is comprised of 28 acres and has served as the location of several industrial businesses over the years that generated or used a number of types of hazardous substances.

The report states that the hazardous substances used on the property through the decades include the pigments of lead chromate, lead molybdate and zinc chromate. Additionally the hazardous solvents include industrial grade versions of xylene, toluene and MEK.

It was developed in the early 1950s by Crosby Forest Products Co. and included a creosote plant, saw mill, veneer mill, Tung oil mill and a box facility, the report states.

Through the years the property changed names, but appears to have continuously produced wood preservation products under variations of the Crosby name until 1992 when Sunbelt Coatings assumed ownership. The last listed tenant of the property is Valspar, who reportedly operated out of that facility from 2005 until 2017. Currently the property is owned by Sunbelt Coatings Inc. under the care of Sherwin Williams’ tax department.

The report also states, “wastewater and sludge were generated as a result of onsite operations that included washing paint vats, pots, and blending machines with water and solvents. “Dating back to 1953 through circa 1974, wastewater was collected in an unlined concrete basin, allowed to settle, then pumped into an earthen settling pit prior to being released into a drainage ditch leading into Mill Creek to the west and south of the property,” the report states.

Once use of the settling pit ceased, the report states that it was “not backfilled or capped.”

The report goes on to say that the state of Mississippi provided the Crosby company operating at the time with a tolerance permit in 1972 that required the company to define wastewater disposal processes at the site and propose “a more effective treatment method.”

The next year an enclosed system was installed to recover and reuse the wastewater. Sludge generated from this new system “was landfilled onsite,” the report states.

At some point the sludge was “eventually filled in drums and removed offsite.”

Valente said her concern is that the property has not been fully tested to see if contamination is present in the soil. She would like to see the city protect the taxpayers by getting a phase II analysis along with a baseline to know what, if any, contamination exists.

Since lead was listed as one of the potential hazardous materials used at the site, Valente and Councilor Wayne Gouguet feel testing for that and other substances needs to be conducted so the city can make the best decision. But numerous requests to have that testing done have fallen on deaf ears, she said. Valente is concerned that she will be out voted when the matter is discussed during Tuesday’s meeting.

While the property is being offered up as a donation to the city, Gouguet is concerned that if contamination is found on the grounds, the city could be responsible for the price of the cleanup, or potentially assume ownership of property that is unusable. He added that the property has been up for sale for about a decade, leading him to question its value.

“Free is not always free. There is a reason it may be free. Big corporations don’t usually give something away that is of value for just a tax break,” Gouguet said.