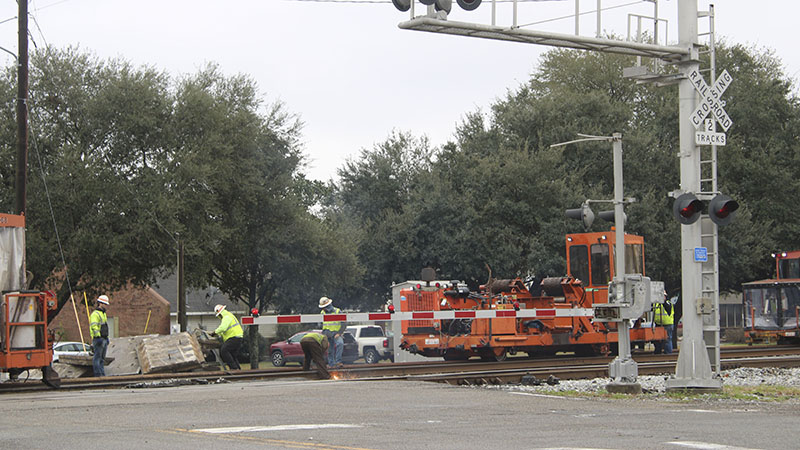 Crews with Road Safe Traffic Systems conduct repairs in the city of Picayune Monday morning. The work led to the closure of several crossings in that area. Photo by Cathy Cook.

Road closures in Picayune due to ongoing rail repairs led to city officials becoming displeased with the company conducting the work because of a lack of communication.

Picayune Police Chief Freddy Drennan said that Monday morning crews with Road Safe Traffic Systems, the company hired by Norfolk Southern to conduct the repairs, failed to alert the city that crews would be closing several railroad crossings that day.

Matt Woody, railroad project coordinator for Road Safe Traffic Systems, said that the break down in communication appeared to have occurred with some members of the ground crew. He said it was his understanding the call to the city alerting them that the work would start Monday was made already, but apparently was never made.

“There should have been a phone call or two made last week, and that didn’t happen,” Woody said. “I know that it causes issues when this happens.”

Woody said two drivers on the crew were terminated this week, but declined to elaborate whether their terminations were directly tied to the lack of communication with Picayune officials.

The lack of communication caused an issue with traffic in several ways, including limiting the city’s ability to notify the public of the impending closures. It also affected school bus routes and potential emergency service response. Drennan said it is fortunate no major issues occurred as a result.

Drennan said he plans to send the company a bill for the extra man power he had to dispatch to those areas to direct traffic.

The work ongoing at the crossings of Fourth Street, Goodyear Boulevard and Canal Street is expected to be complete by today, Jan. 12, Woody said. That work will then shift to Martin Luther King Boulevard on Wednesday. Drennan said he was informed that Bruce Street may also be closed tomorrow, but Woody said the rail manager at the site did not mention that crossing.

The work is taking so long because it also involves replacing the metal rails, which haven’t been replaced since 1954, Drennan said.

When the crews return to conduct smoothing work to the crossings, Woody said the crews will only work on one lane at a time to allow traffic to continue to flow at each crossing.