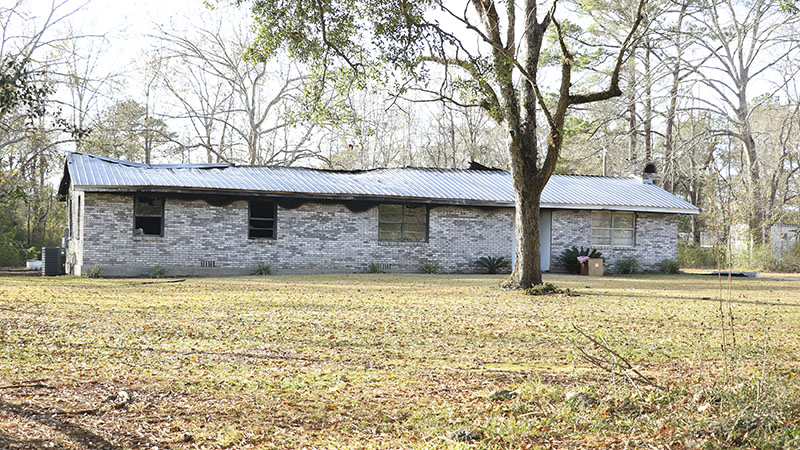 TOTAL LOSS: A fire that occurred on Monday damaged the roof of this home located on Luther Davis Road. No injuries were reported and the cause was found to be due to an electrical short. Photo by Jeremy Pittari

Several Pearl River County residents lost their homes to fires over the past couple of weeks, one of those fires occurred on Christmas Day.

Pearl River County Fire Marshal Jonathan Head said volunteer firefighters responded to a house fire at 2976 Burnt Bridge Road on Dec. 19 when at 3 p.m. that day the residents noticed fire coming from the area of the chimney. Firefighters responded and were able to knock the fire down quickly, limiting damage to the living area around the fireplace. Head said the fire originated from the fireplace and the investigation showed the cause was due to damage to the fireplace’s exhaust vent.

On Dec. 23, another fire was reported, this time at 289 Silver Run Rd., at about 12:30 p.m. The residents had been outside working in the yard when they noticed smoke coming from the home. Investigation into the cause determined it was due to a cooking fire. That home was a total loss, Head said.

Christmas Day, a fire occurred at 217 Molly Seals Road at about 3 p.m. Head said that firefighters responded and put the fire out, but that home too was a total loss. The occupant of the home was able to escape the fire without injury. Investigation into the cause determined an electrical short was at fault.

Monday, firefighters with Nicholson Volunteer Fire Department and the Picayune Fire Department responded to a fire at 123 Luther Davis Road. Head said that a fast response from those emergency personnel helped bring the blaze under control, but the fire burned quickly leading to a total loss of the home. That fire also appears to have started due to an electrical short in one of the bedrooms. The occupant of the home was working in the yard when smoke was seen coming from the eaves.

No injuries were reported as a result of those fires, Head said.

Those who lost their homes were referred to the American Red Cross for assistance.