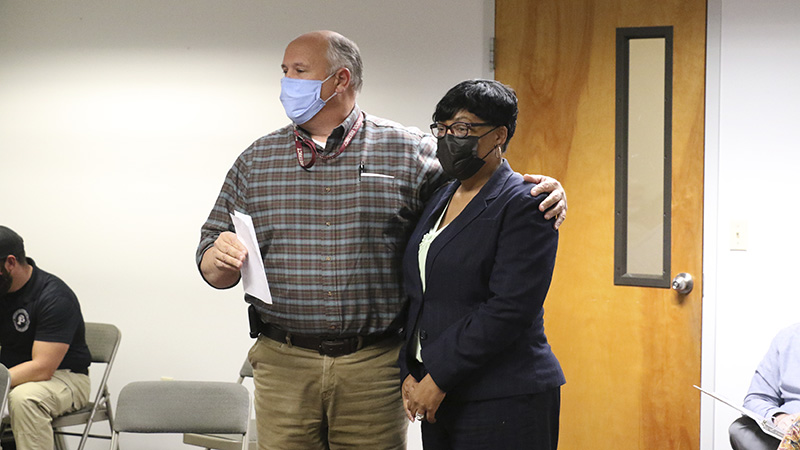 RAISING THE BAR: Picayune Junior High Principal, at left, commends Yolanda Parish for her continuing efforts to support and educate the students within the Picayune School District. Photo by Jeremy Pittari

Tuesday’s meeting of the Picayune School District’s Board of Trustees included a musical performance, recognition of an outstanding teacher and discussion of taking out a loan and dealing with an ever increasing Worker’s Compensation policy.

Picayune Memorial High School student Dylan Littles started the meeting off by leading the group in prayer, after he performed a song for those in attendance. Littles said he was inspired to play the song for the Board after God placed the idea in his heart.

After his performance, Picayune Junior High School Principal Gen Breland took a moment to recognize one of the district’s most outstanding teachers, Yolanda Parish. He described her as a dependable educator who is supportive of the district’s various sport programs. She’s not only a coach of the high school’s girls basketball program, she also takes time out of her busy schedule to write encouraging words on post cards that she gives to two students monthly.

The words of encouragement inspired one parent to send a letter back to Parish, which Breland read aloud to the Board. In the letter the unnamed parent thanked Parish for her efforts to guide their child to become a man they will be proud of.

“It’s teachers like you that produce solid citizens,” Breland read from the letter.

Parish said she is proud to be a member of the Maroon Tide team and said that moving back to Picayune was one of the best decisions she ever made.

“I love the sports, but most of all I love my kids,” Parish said.

In other business, District Finance Director Lisa Persick asked the Board to approve taking out a Tax Anticipation Note to cover a shortfall in payroll to ensure the more than 600 employees are paid and other expenses are covered.

The anticipated $940,000 loan will be paid back at a prime lending rate plus two percent using ad valorem taxes that will be collected in 2021.

Board attorney Jim Keith said loans such as these have become common across the state this year due in part to the pandemic.

Beth Stewart Jarrell also spoke to the Board about the district’s Worker’s Compensation policy, which has been on the rise due to claims.

Luba Workers’ Comp is proposing an increase of about $60,000 for the policy, Jarrell said. This year a total of 14 claims were submitted, but she estimates that only six will amount to anything.

Additionally, due to the policies and protocols put in place as part of the current pandemic, she expects the rates to start to decline.

Jarrell said she was able to find a company that could provide the district with a policy at a rate that is $2,500 less than Luba’s.

That matter was tabled to allow the Board and district administration time to review the information Jarrell presented.