Mayor Ed Pinero honored, announces he will not seek reelection 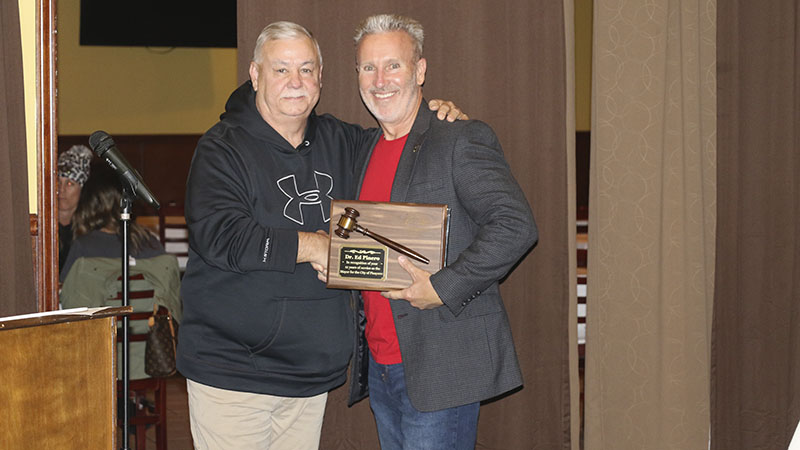 THREE TERMS: City Operations Director Harvey Miller, left, presents Picayune Mayor Ed Pinero with a plaque recognizing him for his 12 years of service to the city. Photo by Jeremy Pittari

In the final leg of his current term, Picayune Mayor Ed Pinero said he will not run in the upcoming election.

Thursday, his friends and family attended a party to celebrate his three terms in office.

After announcing his candidacy in 2009, he was elected mayor for his first term later that year. Prior to being elected, he served as city manager of Picayune, and after that as the director of planning and zoning for Pearl River County. He was also employed with the University of Southern Mississippi for 14 years under several titles prior to those positions.

During the recognition party, Pinero said some of his friends and family convinced him to run 12 years ago. He cited A.L. Franklin and former Poplarville Mayor Woody Spiers as mentors, in addition to the citizens of Picayune.

After taking office, that administration faced several challenges to make the city better, such as moving the city’s waste collection contract away from Waste Management, rectifying a $4 million deficit, and paving every street (62 miles worth) within the city.

Getting every city street paved was a campaign promise he ran on, and said he was glad to follow through on that promise even though it resulted in the only tax increase during his time in office.

He gave thanks to City Clerk Amber Hinton and her team for fixing the deficit, Public Works Director Eric Morris for his work to keep the city’s infrastructure going and said he appreciates City Operations Director Harvey Miller and City Manager Jim Luke for their leadership.

Under the current administration, an expansion to the historic City Hall helped make the building ADA complaint, while also consolidating most city offices into one building; all at no direct expense to the tax payers.

Pinero said he is also proud of the flower beds throughout the city, which are part of an ongoing beautification project that keeps a team of hardworking women busy.

While he said the current administration can’t take all the credit for this next accomplishment since it was decades in the making, he is glad to have been able to help bring the widening of Highway 11 to fruition.

At the end of his speech, he announced that he will not seek reelection, and challenges every one who considered running for the position but decided not to out of respect for him to give it thought.

“It’s been a good run, 12 years is plenty. The stress will kill you if you’re not smart enough to go away,” Pinero said.

While he will not seek reelection, he said he will still be involved in the community, and hopes that the next administration will keep the budget at an A+ rating in relation to audit scores, ensure tax dollars are used wisely and continue the current administration’s run of not raising taxes.

Pinero said he will continue to serve in his current capacity as Dean of Career and Technical Education at Pearl River Community College.

“It’s been an honor to serve the citizens of the city of Picayune. I am not going away, so it will be fun to witness the progress from the outside looking in,” Pinero said.

While Jim Luke did not say he will run for mayor when Pinero asked him directly during the event, Pinero said he will support Luke if he decides to run. Luke’s response to whether he would run was simply that he would pray about that decision.