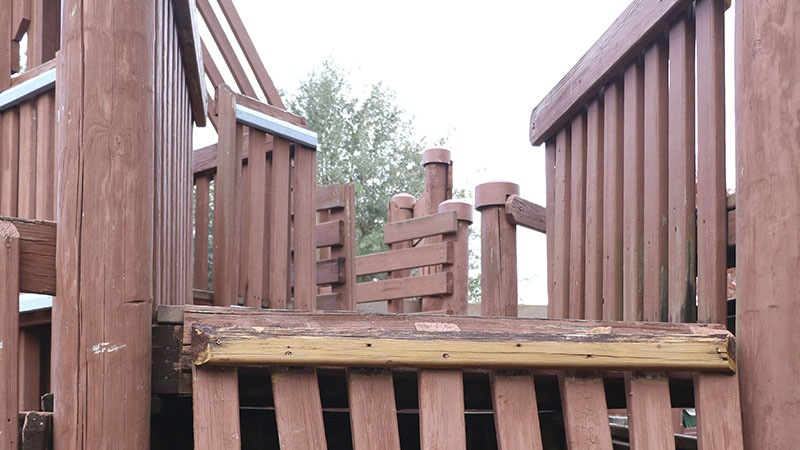 no longer safe: This barrier has become unsecured to a section of Kids Kingdom, creating a place where a child could fall. Photo by Jeremy Pittari

Parks are an integral part of any city. Within Picayune there are several parks for the residents to enjoy, but a playground at one park is nearing the end of its life.

Kids Kingdom at Friendship Park was an icon of a playground when it was built in 1994. Boasting sprawling wooden decks that connect to various slides, hiding places and even a simulated rock wall, kids of all ages could play to their heart’s content under the watchful eye of a parent sitting in a near by bench.

But today, those wooden components used to make that playground are showing their age. Bits are falling off due to rot, railings have become useless in keeping children from falling off of high places and the plethora of mulch on the ground has been washed away from years of neglect.

A grant application for more than $400,000 was submitted by the city of Picayune in the hopes of getting BP funding from the state, but two other projects were submitted at the same time. The likelihood of getting approval for just one of those grants is not high.

Parks and Recreation Director Trevor Adam said the playground at the park is a bit outdated, leading to the parks project being added to the list of grant proposals. If that grant is approved, the plan is to build a new playground where the old tennis courts used to be and construct some pavilions for the adults to sit under. The grant would also be used to construct bathrooms at Friendship Park and build upgrades to several other parks.

If that grant is not approved, then the city may decide to submit a request for grant funding from the Lower Pearl River Valley Foundation. Other than that, funding to repair the park is not in hand.

Renovation of Kids Kingdom was conducted after Hurricane Katrina through a Pennies For your Park effort.

City Clerk Amber Hinton said those two taxes generate about $440,000 from the food sales and $48,000 from the hotel rooms annually. Of those funds, $219,238 is used to pay on the $3.5 million bond, the rest is used to subsidize operations of the parks.

The current bond does not expire until 2024, but Miller said he would like to see the Council keep it in place to help fund operation of the parks and future improvements.

Adam said he has plans to improve other parks in the city, such as a disc golf course. He has not worked out all of the details yet, but he is in talks with some organizations that may be able help him secure the goals needed to get that in motion.

He also wants to install LED lighting at the city’s several basketball courts so young people can play ball after the sun goes down. Adam hopes to be able to get those improvements done with current budget funding.