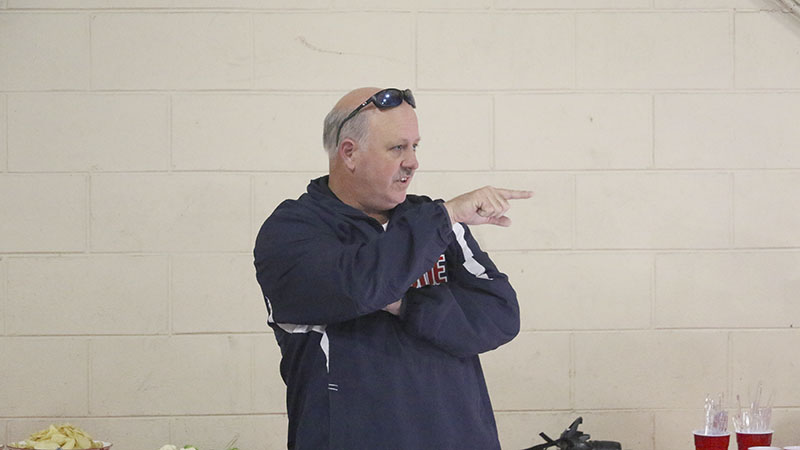 NEXT CHAPTER: Picayune Fire Chief Keith Brown, who will retire on Dec. 30, points to his fellow fire fighters to thank them for their hard work during his tenure. Photo 4by Jeremy Pittari

After more than 28 years as a full time firefighting professional, 18 of which were as chief of the Picayune Fire Department, Keith Brown will retire from state employment and enter the private sector.

Brown’s last day at the Picayune Fire Department will be Dec. 30, at which time he will seek out a position selling fire service equipment for an as yet unnamed company.

According to information complied by his long time co-worker, Janet Guidry, Brown graduated from basic law enforcement training in 1993 and was a member of the Poplarville Volunteer Fire Department from 1990 until 1992 when he joined the Picayune Fire Department.

In 2001 he was promoted to take on the responsibilities of fire marshal and training officer.  A year later he was moved up to the rank of Fire Chief, a position he will have served in until the end of this year. During his tenure with the department, he oversaw the construction of two fire stations, purchase of two fire engines and the implementation of a new rank system that broke the positions of fire marshal and training officer out to two people instead of one.

“That’s a big deal to be able to accomplish all this and not raise taxes,” Brown said.

Through his work, which he credits primarily to the work of his team, the department improved its rank from a 6 to a 4, thereby providing home and business owners in Picayune with cheaper fire insurance policies.

Guidry said that during her time working with Brown, the staff within the department became like family.

The support of one’s nuclear family is also instrumental, especially while working as a first responder. Brown said the support of his wife, Lisa, and children was key, most of all during those nights when he was called into work for a major incident.

“Lisa has slept with that radio on for 20 plus years. When I would get back home she’d ask if everyone was ok,” Brown said.

Brown said that the many accomplishments of the department are due to the hard work of those who accomplish the day to day responsibilities, and the support of the city’s mayor, City Council and city clerk. In support of his fellow firefigthers, Brown said that many people may not know that they spend a third of their lives at the department. Where as a person working a full time job will put in about 2,080 hours a year, a firefighter is typically at work for more than 2,900 hours.

Brown said he initially had plans to be a law enforcement officer, serving under Sheriffs Danny McNeill and Joe Stuart. But somehow life diverted him to the fire service. He said that both fields have a number of similarities, such as how determining whether the cause of a fire had a human element relates to solving a crime.

Since he hasn’t reached the age at which most people retire — he will be 50 in April — he plans to enter the private sector selling fire equipment to subsidize his family’s income.

Brown said he chose to step down to reduce his stress level, adding that this year in particular has been a challenge.

While he can’t say who will take his place, he is sure that his successor will take the department into a future where COVID-19 will influence changes similar to those enacted after the attacks on Sept. 11 of 2001.

He said his department has been fortunate during the pandemic, with only four personnel testing positive, and only one of those people having cold like symptoms.