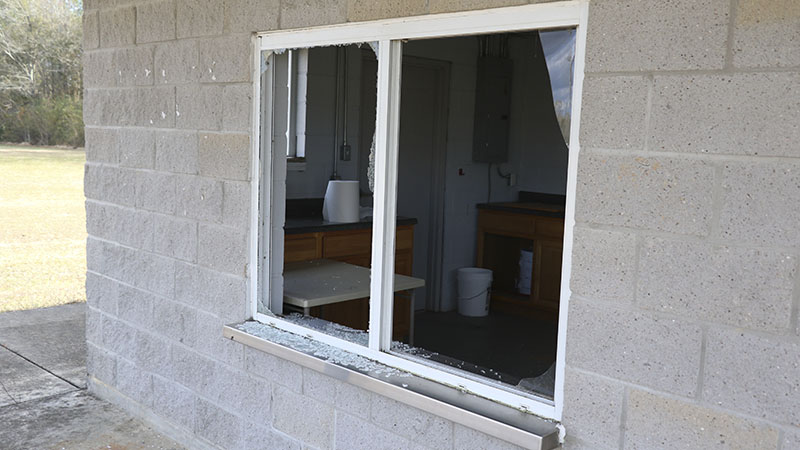 This window at a small concession stand at Friendship Park was broken out in an act of vandalism that occurred over the weekend. Photo by Jeremy Pittari

A window at a small concession stand at Friendship Park was broken out in an apparent act of vandalism over the weekend.

Parks and Recreation Director Trevor Adam said that while the window was broken out and a toilet paper dispenser in the bathroom was damaged, the damage was minimal and nothing was taken.

He estimates it will cost about $650 to replace the damaged glass and repair the frame. A metal roll down door is also slated to be installed as part of the repairs, much like the roll down doors on all other concession stand windows at that park.

Vandalism at the parks in Picayune does not happen everyday, but Adam said that every two to three months some sort of incident occurs at one of the city’s several parks.

Overall the community is pretty good about taking care of the public facilities, but at times older teenagers tend to be responsible for any acts of vandalism.

Adam has also noticed that people cut donuts in the open fields at the parks, which is the form of vandalism he sees most.

He asks that anyone who sees or has knowledge of anyone responsible for vandalism at the parks to call the city and report it.

In the meantime, city officials are pricing cameras with cellular connections to be installed in various places in the parks so those responsible for future incidents of vandalism can be held accountable.