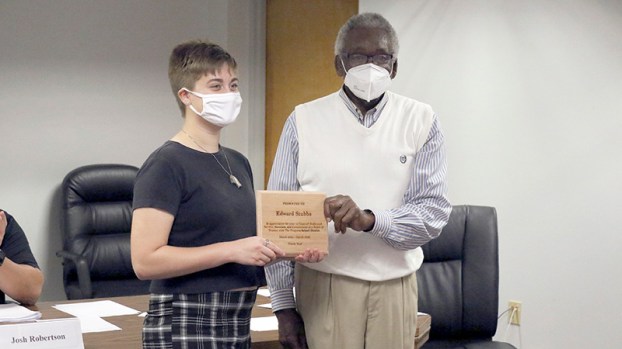 PMHS student Kellie Watts presents former School Board member Edward Stubbs with a plague for his 15 years of service to the school district. Photo by Jeremy Pittari

Stubbs, Drennan and swim team recognized by Picayune School Board of Trustees

During Tuesday’s meeting of the Picayune School District’s Board of Trustees, the swim team, a former board member and the city’s new police chief were recognized.

First up was the swim team. Head Coach Rachel Rutherford introduced her team to the Board before coving their successful season.

At the state meet, the girls team placed ninth out of 18 teams, while the boys placed 15th out of 17 teams. Rutherford added that nearly every member of her team has become successful in every stroke used in swimming competitions.

Edward Stubbs was recognized for his 15 years of service to the district as a Board member from March of 2005 until March of this year. Kellie Watts, a Picayune Memorial High School student, made Stubbs a special plaque using a laser engraver stationed in the engineering program at the Career and Technology Center.

Stubbs was described as a dedicated member of the community who is willing to help where he can.

After being presented with the plaque, Stubbs said he was pleased to be able to serve the district as a member of the Board of Trustees during those 15 years and asked that the staff continue their work to better the district.

Mitt Cole, a 2004 graduate of Picayune Memorial High School, also came before the Board on Tuesday, but it was he who wanted to give something back to the district. During the meeting he presented a $100,000 donation to the Early Head Start program to ensure all students become literate.

Dr. Pamela Thomas, Director of the Early Head Start and Head Start programs in the Picayune School District, said the funds will be used to increase literacy development in those programs.

With the announcement that Picayune Police Chief Bryan Dawsey would be retiring this month, the city of Picayune was tasked with finding a replacement. City Manager Jim Luke said in previous coverage that he interviewed several people, both inside and outside the department. He would later choose Freddy Drennan, who served as police chief from 1989 until 1996.

Drennan addressed the Board, saying his intention is to be available if the district needs anything, and his department is committed to working with the Picayune School District’s school resource officers and with the Pearl River County Sheriff’s Department.

In addition to Luke and Drennan making an appearance at the meeting, Sheriff David Allison was also in attendance.

Superintendent Dean Shaw took a moment to thank Allison for his help in getting the Lee Triplett Stadium cleaned up on Saturday mornings.

During discussion of the district’s finances, Finance Director Lisa Persick informed the Board that revenue is about $77,000 less than this time last year. Additionally, she is looking into the need to take out a tax anticipation loan to cover the $1.3 million spent to purchase Chromebooks and laptops.

Persick said the loan is necessary because the district will not be reimbursed with CARES Act funding for more than a week.

Shaw said the extra pay is a reward to the staff for their hard work. Persick said she expects to be able to send out the extra payments by the 16th of this month.

Payments will be given to any employee who holds a certified license, is a teaching counselor or a librarian.

Administration will not qualify for the payment unless they were in one of those three categories during the 2018-2019 school year. Additionally, any teacher who was with the district at that time but left employment with the Picayune School District will not get the bonus.

Low cost care for pets at the park

The Pearl River County SPCA will be offering a low cost shot clinic for cats and dogs on Saturday, Nov.... read more