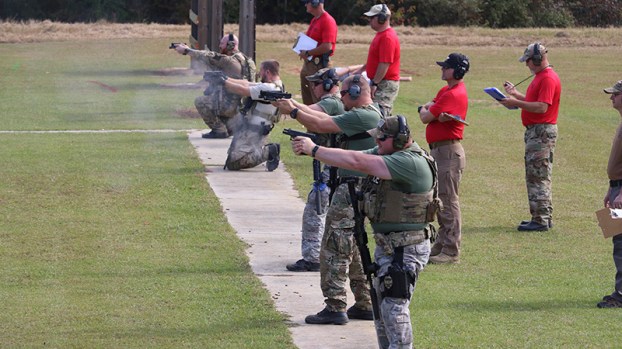 BEST SCORE: In order to place in the event, competitors had to get the best score in the least amount of time. Photo by Jeremy Pittari

Wednesday and Thursday, gunfire could be heard from the field near the Pearl River County Sheriff’s Department, but it wasn’t from any sort of illegal activity. The rounds came from the precision aim of five teams participating in a SWAT competition.

On that plot of land is an obstacle course built from creosote poles and other wood, a pistol range, sniper rifle range, 400 yard rifle range, covered 100 yard rifle range and a storage area complete with restrooms. Quave said the features are used for SWAT training and many of those things were constructed within the last several years. Mississippi Power Company provided assistance in the construction of the obstacle course by donating the creosote poles and helping to install them in the ground. Some of the construction of various aspects of the course was conducted sheriff’s department personnel, and the county road department personnel.

Five teams from across the region participated in the event, which is about half the participation level from years prior. Each team was tasked with completing each of the events in the competition for the best score and time. Quave said the event also features a block of training, which was focused on tactical medical procedures this year.

At the end of the two-day event, the team representing the Pearl River County Sheriff’s Department was deemed the overall winner, Quave said. Teams were ranked based on an aggregate score across all events.

Even though construction of the various training facilities enabled the local department to host this year’s event, Quave said hosting the competition was lagniappe. Being able to train at a facility nearby is the biggest benefit of having the course.

Quave said he is proud of the Pearl River County Sheriff’s Department for their hard work not only during the competition, but in hosting the event. He would also like to thank the many sponsors who provided donations and monetary support.

“When we first entered contest three years ago, we just got our feet wet. Since then they have honed their skills, trained hard and worked hard to get better. I’m proud of them for all their work and effort in achieving first place,” Sheriff David Allison said.

Allison said that members of the local SWAT train monthly inside and outside county to keep their skills honed. He said the training and especially the competitions mimic real life scenarios that the officers may encounter while doing their job.

The Pearl River County School District had two COVID-19 outbreaks at the middle school campus and one among district support... read more