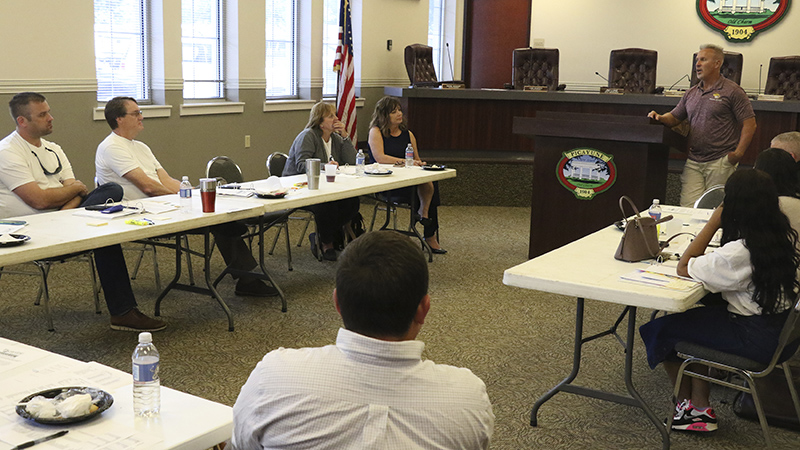 Participants in this year’s Leadership Program listen to city of Picayune Mayor Ed Pinero share his thoughts on the obstacles the city faces to grow the economy. Photo by Jeremy Pittari

With the revival of the Leadership Pearl River County program, now under the Greater Picayune Area Chamber of Commerce, participants can once again get more insight into how the local government works, and the challenges elected officials face to grow the economy.

Presentation is everything, that includes how a city looks when prospective residents and business owners come to town.

Building exteriors is just one of the challenges the city of Picayune faces in that regard. Mayor Ed Pinero said there is only so much a city can do to rectify the problem of less than fresh facades, especially since a number of current buildings are grandfathered in. However, with the expansion of Highway 11, Pinero said that many property owners may start to take more notice of how their building looks from the road.

Another problem is the trash and unkempt grass between exits 4 and 6 of Interstate 59 within the city limits of Picayune. Pinero was asked if the city could assume responsibility for the upkeep of the appearance of that area. He shed a little light on that topic by saying the Mississippi Department of Transportation indicated that if the city wanted to take over that responsibility, it would also have to assume maintenance of the light poles in that area. That responsibility would including paying the light bill for the large street lamps in that area. Pinero said the light bill for those lighting systems exceeds even that of Friendship Park, so the funding would be hard to find.

Councilor Tammy Valente said the city also has a problem with empty buildings. Her suggestion to rectify that problem would be to repurpose some empty commercial buildings into residential, providing mixed use area in those areas of the city.

Funding to keep roads maintained is another task for elected officials; especially the Pearl River County Board of Supervisors. Board President Sandy Kane Smith said that the county has started to receive sales tax funding from sales generated online, which is a revenue generator considering the county receives no sales taxes from businesses. Smith said the state would be hard pressed to give up any portion of the sales tax generated outside of a municipality. Currently cities are the only government agencies other than the state to get a cut of sales tax generated from brick and mortar locations.

As far as places to expand the commercial and residential areas in the city, and therefore the population, Pinero said the only place left within Picayune without annexation is Highland Parkway.

There are bright spots in the city. Pinero pointed out the city employs a team who focus on building and maintaining flower beds to beautify the city.

“You don’t see that in a lot of cities,” Pinero said.

Currently the major economic driver in Pearl River County is the construction of homes, Smith said. On average, 100 building permits are pulled in this county monthly, he said.

To add another component to the economy, Smith hopes to be able to utilize a 30 acre spot of land near the Picayune Municipal Airport to create a Technology Park.

The loss of young people to other areas is another problem this area faces. Pinero said the goal is to create more high paying jobs locally so graduating seniors and college graduates don’t feel the need to move away. Part of that is maintaining the relationship with Stennis Space Center, Highland Community Hospital and local businesses.

Job creation is also where Pearl River Community College comes in. Pinero said young people don’t need a four year degree to find high paying jobs. PRCC has a number of programs that can provide the skills needed to get a high paying job in much less than four years.