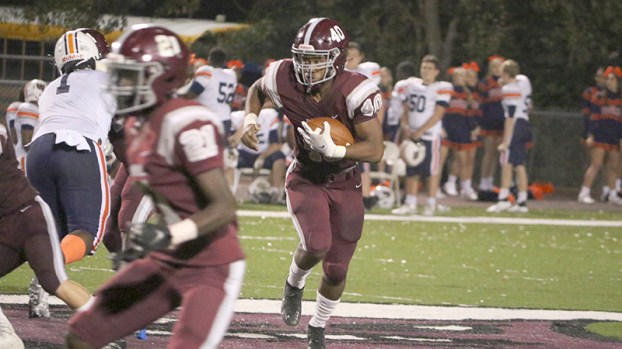 In a hard fought matchup between two power house teams, the Maroon Tide fell to the War Eagles Friday night 27-16.

Wayne County took the lead and held on to it the entire night, but there were glimmers of hope for the Maroon Tide when the local team tied the score early in the game. But the team just couldn’t capitalize on the opportunities that were presented later on.

Deep into the first quarter, the War Eagles put points on the board after a nine play drive covering 50 yards was capped off with a 26 yard play that ended with the team’s quarterback completing a pass to a fellow player for a touchdown with 1:44 left in the quarter. The PAT put the score at 7-0.

The Maroon Tide tied the score up with 2:49 left to play before halftime when quarterback Isaac Hickman used a keeper to cross the end zone. Morgan Craft’s PAT helped tie the score at 7-7 where it remained until the third quarter.

With 4:20 left in the third, a War Eagle running back toted the ball from the 12 yard line, giving Wayne County a 14-7 lead with the successful PAT attempt.

The War Eagles widened the lead when another running back toted the ball for more than 35 yards with just eight seconds left before the final quarter. A PAT fake that converted to a two point conversion attempt failed, leaving the score at 20-7.

Right at the start of the fourth quarter, one of Wayne County’s players suffered an injury that required EMS attention, delaying the game for a bit. When play resumed, Hickman completed a pass to Jashawn Lee for another Maroon Tide touchdown with 11:09 in the fourth quarter. Combined with Craft’s PAT, the score now sat at 20-14.

Wayne County answered right back when a running back scored in a play for more than 60 yards that ended with a War Eagle touchdown. The successful PAT combined to put the score at 27-14 in favor of Wayne County.

Picayune gained two more points after an interception by Wayne County put the visiting team at their own two yard line. During the subsequent play, the Maroon Tide’s defense blitzed the quarterback, scoring a safety with 3:50 left to play, bringing the score to 27-16.

“Wayne County played with a lot of heart. They had some bad luck this year and this was their last game and they came out and played it like it was. We matched them there for a little while, but just got a little tired and they made some good plays and we didn’t and that’s just the bottom line. We gotta come back Monday and get ready to go. Now it’s do or die, so it’s win or go home. I have a lot of faith in my guys, we’re not going to freak out, it’s not the end of the world but we’re going to get better on Monday,” said Maroon Tide Head Coach Cody Stogner.

Editor’s note. The roster for the Wayne County varsity football team on MaxPreps.com was inaccurate.

Poplarville’s Lady Hornet basketball team is making the most of this offseason as the team tries to secure a playoff... read more