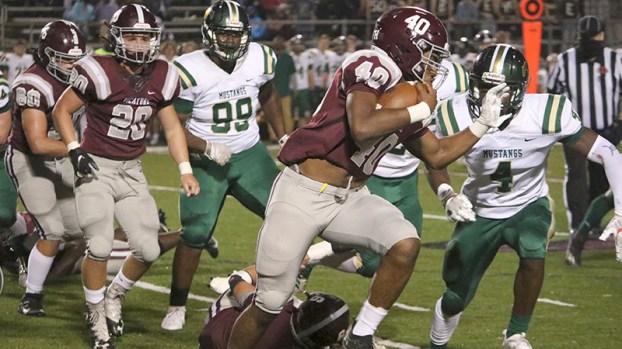 Dante Dowdell fights through the defensive line of the West Jones Mustangs during Friday's game. The Maroon Tide fell to the visiting team 35-23. Photo by Jeremy Pittari

The Maroon Tide put up a fight Friday night against the Mustangs, but Picayune found it difficult to take the lead once West Jones started the game with an early 14 point lead.

“Tonight’s game didn’t go our way. We spotted them 14 points early, but I thought we were really in the game there going into halftime. We had chances to make plays, we did make the plays. It just wasn’t our night,” said Maroon Tide Head Coach Cody Stogner.

An early fumble by the Maroon Tide during the first kickoff of the game gave the Mustangs first possession of the ball at the Maroon Tide 27 yard line. Six plays later the Mustangs put points on the board when Alan Follis completed a pass to Marlon Lindsey. Combined with Joseph Hernandez’s PAT, the Mustangs had an early 7 point lead with 9:28 still to play in the first quarter.

On the Maroon Tide’s next possession, a fumble during the first play of the drive gave the Mustangs possession again. The visiting team reached pay dirt three plays later when Follis completed another pass to Tajarick Randolph from 26 yards out. Another PAT from Hernandez gave the Mustangs the early 14 point lead.

On the ensuing possession, the Maroon Tide had to settle for a field goal from Morgan Craft after pushing more than 50 yards to the Mustangs’ 32 yard line. With 2:18 left in the first quarter the Mustangs led 14-3.

The Maroon Tide closed the gap on the Mustangs’ lead in the second quarter with 3:56 left until halftime when Austin Samples completed a touchdown run from the Mustang 10 yard line. Craft’s PAT helped put the score at 14-10.

In the third quarter, the Mustangs widened their lead when Kentrell Pruitt toted the ball in from the Maroon Tide 15 yard line. With 7:21 remaining in the quarter, Hernandez’s PAT fell through the uprights, putting the score at 21-10.

Picayune answered back on the next possession through a 50 yard push through seven plays that culminated in a Samples touchdown from the Mustang 3 yard line. Craft’s PAT helped put the score at 21-17 with 4:37 remaining in the third.

Just before the start of the fourth quarter, the Mustangs scored again when Follis completed a pass to Zyquawn Williams from the 17 yard line. With Hernandez’s PAT the Mustangs led 28-17.

Picayune again began to close the gap when Samples carried the ball from the Mustang 6 yard line with 3:32 left in the fourth, putting the game at 28-23 after a failed two point conversion attempt.

The final scoring play of the game came with just a bit more than two minutes left on the clock when Follis completed a pass to Williams. Hernandez again put the ball through the uprights, putting the final score at 35-23.

Even though the Maroon Tide fell from the playoffs this year, Stogner said his team should be proud of their accomplishments, especially in a season plagued by a pandemic.

“It was a great season this year. It was just what we had to battle with, I mean COVID and a lot of guys stepping into positions they never played. I think we’ve had 15 kids play over a thousand snaps this year. That’s one thing these guys will never be told is they gave up. They played hard every snap this whole season,” Stogner said.

He is also proud of his outgoing seniors for their effort and the adults they will become.

“I’m just so proud of the seniors this year. They showed tremendous guts all season long. We played from behind and we played from in front and they never gave up. That’s just a testament to them and their families. I know with the guts they have they’re going to be great dads and great husbands one day,” Stogner said.

The Poplarville Hornets took on the South Pike Eagles in a second round matchup that saw the Hornets win 27-6... read more