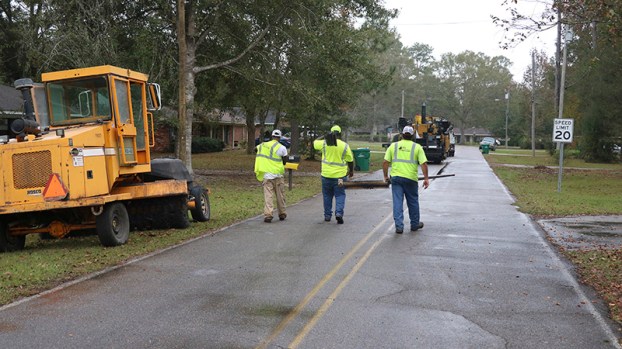 WEATHER DELAY: Crews with Huey Stockstill Inc., the company awarded a more than $6 million paving project in Picayune, had to cease work in the Westchester subdivision Tuesday due to rainy conditions. Photo by Jeremy Pittari

Crews have mobilized in an effort to repave streets throughout the city of Picayune as part of a $6 million paving project.

Traffic should only be minimally affected by the work, which is currently underway in the Westchester subdivision, Ridge Road and Third Avenue as of Tuesday. Jonathan Hickman with Dungan Engineering said work on Third Avenue will wrap up soon. The Council approved the project back in March of 2019. The last citywide paving project took place about a decade ago.

To ensure the number of cutouts in the new asphalt remain minimal, city crews are looking at the streets on the list to be paved to ensure there are no sewer or water line leaks, said Public Works Director Eric Morris. This project will be complete by spring of next year, weather permitting.

Hickman said that the city and the Pearl River County Utility Authority, the agency that owns the city’s sewer system, recently spent millions over the past five years to fix leaks throughout the water and waste water systems.

Morris said an old steel water line on North Buren Avenue was recently replaced since it was full of patches. While replacing the line, it was relocated from under the asphalt to green space in the right of way.

When work is conducted on a street with heavy traffic the city will provide updates via its social media account.

“We ask for everyone’s patience at this time,” Morris said.

Other projects underway within the city include completion of a citywide water line rehabilitation project that aimed to remove nearly all transite water lines. Minor aspects of that project include adding valves to the system.

Also, in preparation for the second phase of the Highway 11 widening project, the city is working the Mississippi Department of Transportation to request bids.

Charles Simmons is one of many local residents who served in the armed services who should be recognized during Veterans... read more