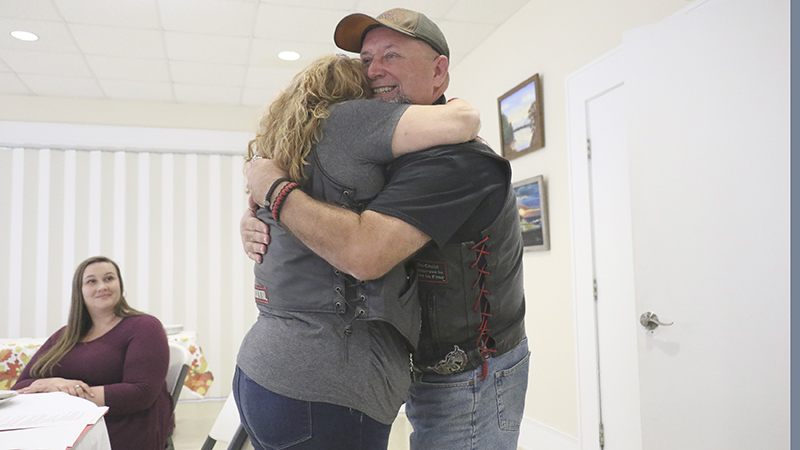 BEAR HUG: Bikers Against Child Abuse members “Fa Real” and “Serious” pretend to fill a stuffed bear with love by putting it between them before engaging in a hug. Those bears are presented to the children the non-profit organization helps as a transitional object to help them get through instance of abuse or other negative life scenarios. Photo by Jeremy Pittari

The proceeds from a Poker Run held by the Exchange Club of Picayune was donated to the local chapter of Bikers Against Child Abuse this month.

During their visit with members of Exchange Club of Picayune, the two BACA members shared a bit about how the organization is doing. Members come up with street names for use when conducting BACA duties.

Charlie “Serious” Stuart said members of the organization may look like they are part of a biker club, but they are really just everyday people, such as doctors, lawyers and government employees, who like to ride motorcycles and want to ensure children are protected from those who may be causing them mental or physical harm. The biker image is leveraged as a form of intimidation towards the person who is causing that harm, but members never engage in acts of vigilante justice or violent behavior.

Stuart said the donation will go a long way for the small organization, especially since they keep expenses low, normally only attributed to the purchase of stuffed bears that are presented to the children by members as a transitional object. Before the child receives the stuffed bear, members fill it with love by putting the bear between two members and giving each other a hug.

Becoming a member of the organization is not a short process. Stuart said his training took about 16 months. The minimal amount of time required to complete that training is 15 months. Contact with a child who needs help does not occur until that person completes the training.

Potential members are also required to participate in at least 80 percent of activities and undergo an NCIC background check. Then the board will decide if the person qualifies for membership.

Stuart’s chapter is the only one in Mississippi, but other chapters exist in Louisiana, Alabama and across the globe. When they can, they support each other in their mission.

BACA started about 25 years ago as a basement non-profit with the goal of helping children understand that there are people in the world who care about them and support them.

If the parents and child consent, the child gets to pick their street name, which is added to a motorcycle rider vest of their own.

Interaction with BACA members typically includes only, but at least, two primary individuals within the group. During those interactions, they visit the child and either engage in activities the child chooses, or just have a conversation about anything the child would like to talk about. Members do not get involved in any court cases linked to the child and are not versed in the details of a particular case and they never provide any kind of counseling services. However, they may show up as support on a court day if needed. Visits are conducted about every two weeks initially, and usually taper down to once a month as the situation winds down. Removal of fear is the primary objective.

If for some reason the perpetrator of the child’s abuse escalates the situation, BACA may help the family find a safe place to stay temporarily, or they may gather other members and just park outside the home to stand watch.

Stuart said that the current pandemic has led to an increase in calls for assistance. The local chapter currently works about eight cases with five full time members and 11 heroes.