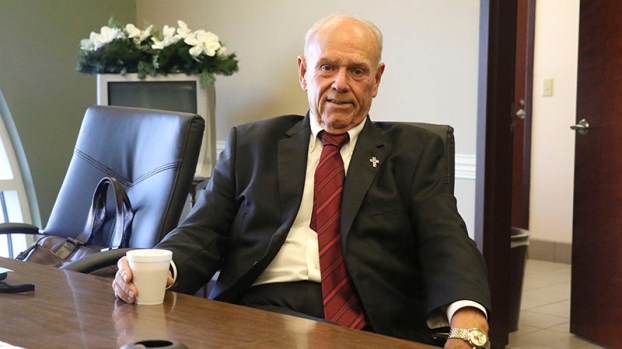 Freddie Drennan has been named as the new police chief for the Picayune Police Department. Photo by Jeremy Pittari

Frederick Douglas Drennan has been named the new police chief of Picayune after current Police Chief Bryan Dawsey has indicated he plans to step down next month.

Drennan, who has more than four decades of law enforcement experience and is a native of Picayune, was a former chief of the Picayune Police Department from 1989 until 1996. Before that he worked in patrol and later as chief of detectives for the St. Tammany Parish Sheriff’s Department from 1970 until 1989. After leaving the Picayune Police Department in 1996 he went back to the St. Tammany Parish Sheriff’s Office as the chief of detectives from 1996 until 2002, when he was elected chief of police for the Slidell Police Department. He served in that role until 2010 when he was then elected mayor of the city of Slidell, a role he served in until his retirement in 2018.

During his time in law enforcement, Drennan worked every type of case, from murders, to rapes to robberies and burglaries. He also underwent a four-year stint undercover conducting hand to hand narcotic buys, leading to the seizure of about 480 tons of marijuana being brought into Louisiana from Columbia. And, he has the training to go along with hands on experience. One of his goals as chief of police in his hometown will be to find as many training opportunities for his personnel to attend.

“I want the best personnel I can hire and to make them the best they can be,” Drennan said.

Drennan’s resume includes a list of several leadership roles and community involvement. During his time as mayor of Slidell, he was responsible for overseeing the more than 300 employees the city had on staff, in addition to overseeing a budget that topped $40 million.

He also promises to continue his previous trend of  transparency with the media concerning events or crimes taking place within the community. That may include announcing when a patrol officer may be staged in a problem area to address ongoing traffic issues.

His thinking in alerting the public that an officer will be working that area is not to give away information concerning police matters, but to get to a point of public compliance.

“It’s my job to get compliance, not see how many tickets we can write,” Drennan said. “I will work to stop it before someone gets hurt or killed.”

Having an open door policy is something Drennan prides himself on, and it’s something he said he will continue as chief of police in Picayune. He also plans to look into previous plans to restrict access to the Police Department on Main Street outlined during a previous City Council meeting back in July. He said he wants the public to feel as though they can access the department to find help even if it’s at 2 a.m. Luke said Drennan will have the authority to determine if the department will be locked after hours. Drennan said any security measures that are put in place at the department will have to be common sense moves.

During his two years of retirement, he came to the conclusion that he still had more to give, so when he heard that Dawsey was stepping down, Drennan called City Manager Jim Luke to express his interest in filling the soon to be vacated position.

Luke said he interviewed several people for the position, but Drennan’s experience and prior work with the city of Picayune stood above the rest. The transition period is expected to be smooth.

Dawsey said he is stepping down after 35 and a half years in law enforcement to spend more time with his family. Dawsey is glad that Drennan is returning as chief, having worked under him during his law enforcement career, which started in 1985 at the age of 21. Dawsey described Drennan as a man he has love and admiration for and knows he will continue to move the department forward.

The outgoing chief said he has been considering his retirement for the past couple of years, but he decided 2020 was the year to do it.

“Everyone will admit that 2020 has been a bad year,” Dawsey said.

He said he will miss the officers and other staff he has worked with over the past three and a half decades, and will always consider himself to be a part of the department.

While he intends to take the next couple of months or so off to spend time with his family over the holidays, he is looking into a couple of options to begin a new chapter in his life. One of those options is law enforcement related, while the other is not.

A Chromebook for every student

The Picayune School District received 2,960 Chromebooks Wednesday, enough for every student in the district. The Chromebooks were purchased using... read more