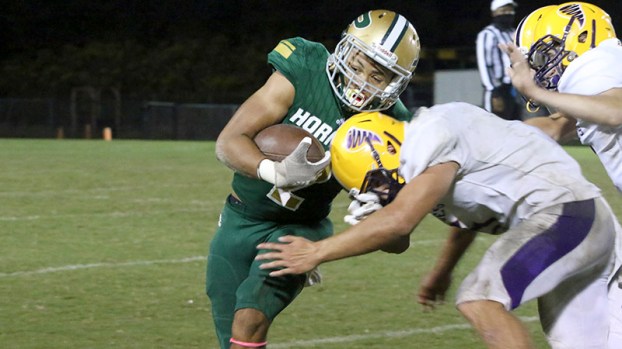 Tailback Maurice Travis carries the ball for the Poplarville Hornets during Friday's beat down of the Purvis Tornadoes. Photo by Jeremy Pittari

The win puts Poplarville 4-2 on the season and 3-0 in district play.
The scoring for Poplarville started early and occurred often in the first half.
With 7:14 still left to play in the first quarter,  Tyron Holston toted the ball from the Purvis 36 to put Poplarville on the board. Preston Stuart’s PAT crossed the uprights, combining to give the Hornets an early 7-0 lead.
After Purvis lost the ball on downs due to an effective Hornets defense, Poplarville’s offense used the very next play to widen that lead when quarterback Matt Will connected with Torry Polk on a long pass play from the Purvis 46 for the team’s second touchdown of the night. Stuart’s PAT helped give the Hornets a 14-0 lead with 2:18 left in the first.
As the second quarter kicked off, the Hornets capitalized on a 57-yard drive through five plays when Maurice Travis crossed the end zone with 11:13 left before halftime. Stuart’s PAT added with the touchdown to give Poplarville a 21-0 lead.
Purvis took control of the ball, but Poplarville’s defense forced a turn over on downs at the Poplarville 23.
Through eight plays,  Poplarville reached pay dirt again when DJ Richardbey toted the ball from the Purvis 38 for another Hornets touchdown. Stuart’s PAT added to the score to give Poplarville a 28-0 lead with less than a minute before halftime.

The second half of the game is where the Tornadoes showed some life. On the team’s first possession of the third quarter, the Tornadoes capitalized on a eight play drive for more than 65 yards that ended in points on the board with 7:31 left in the quarter when quarterback Hunter Robinson completed a pass to Ethan Nored in a play that began at the Hornets’ 12. The PAT from Henry Cutrer combined with the touchdown to keep the Tornadoes from suffering a shutout game, but it would be the last score from the visiting team.

Poplarville scored once more on the night; with only 37 seconds left in the third quarter, Gregory Swann toted the ball for about 65 yards for a touchdown. Again, Stuart found the uprights, putting the score at 35-7.

“We’re on a little win streak now and I’m really proud of our guys.” Head Coach Jay Beech said at the end of Friday’s game. “I hope we can keep rolling and not have any issues with coronavirus.”