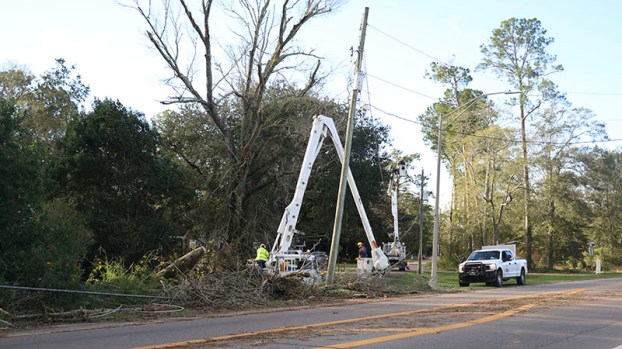 Crews were out along Highway 11 Thursday morning repairing the downed power lines caused by Hurricane Zeta. Photo by Jeremy Pittari.

Thousands of people within Pearl River County are without power due to the aftermath of Hurricane Zeta.

Lollar said crews from out of town are assisting local linemen in restoring power. She said additional crews will arrive later today and tomorrow. Due to the scope of the outages, a timeline when all power would be restored was not available. Part of the restoration process includes assessing the damage caused and determining what parts are needed to restore power. Since Pearl River County is mostly rural, it may take longer to restore power to individual homes as opposed to conducting repairs  in more densely populated areas.

Mississippi Power Company spokesman Jeff Shepard said in the statement, “Customers should be prepared for a multi-day restoration event. Due to the extensive impact across the service territory, damage assessments will continue through Thursday while restoring power.”

Mississippi Power Company is also bringing in more crews to help with the restoration of power. He added that about 2.5 million homes were without power as of Thursday between Louisiana,  Mississippi, Georgia and the Carolinas as a result of the Hurricane Zeta.

Lollar reminds residents to stay away from downed power lines and ensure generators are used safely, which includes ensuring the generator does not back feed to the electrical grid.

Damage minimal in Pearl River County due to Hurricane Zeta

After passing through Pearl River County Wednesday night, damage from Hurricane Zeta appears to be minimal, with damage reported at... read more