County Election Commission to run elections for city of Picayune 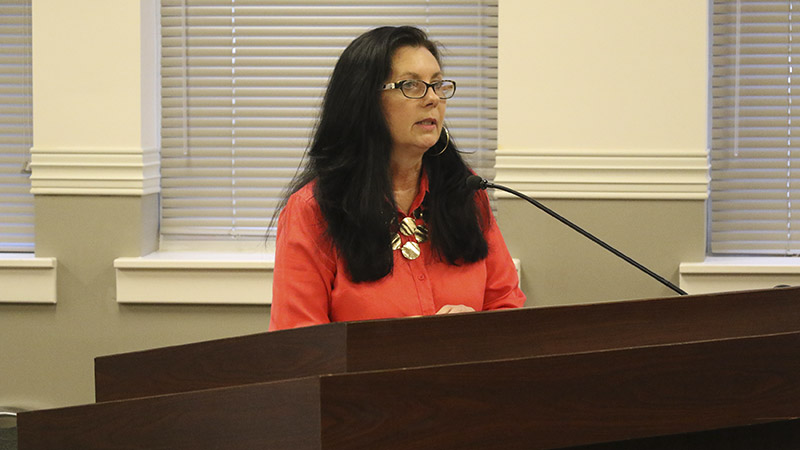 ADDRESSING THE COUNCIL: State Senator Angela Hill addresses the City Council to share her concerns of the medical marijuana initiate on the ballot for the upcoming general election in November. Photo by Jeremy Pittari

Elections within the city of Picayune that pertain to choosing city leaders will now be managed by the Pearl River County Election Commission.
During Tuesday’s meeting, the Council approved a motion to disband the city’s election commission, and turn over all municipal elections over to the Pearl River County Election Commission. Reggie Hanberry, a long time county election commissioner, said the move will change little in the way those elections are held. He said a bill that was passed last year allows county election commissioners to run elections within municipalities across the state because county election commissioners receive annual training.
The cost of a municipal election will still be paid by the city, but the county election commission will take care of hiring poll workers and poll watchers, and will run the election.
Results from municipal elections will still be tallied within each city’s respective City Hall.
The Council also approved a motion to make changes to polling places within two precincts. From now on the polling place in Precinct 2 was moved from the Central Fire Station to First United Methodist Church on Haugh Avenue and the polling place in Precinct 5 was moved from the county building on Goodyear Boulevard to the Margaret Reed Crosby Memorial Library.
The Council also approved adopting a resolution to issue general obligation bonds to provide $285,000 in funds to the city to conduct repairs to the historic side of City Hall. Grant Administrator Christy Goss said the work will repair six columns on that side of the building, make the south entry usable again, repair light fixtures, fix window and door frames, fill holes in the brick and mortar, repair the balcony if required and pay for architectural fees, among other things.
A match to receive the funding is not required, and the city will not have to pay the funds back.
Goss said State Senator Angela Hill was instrumental in helping the city receive the funding.

Nissan of Picayune Teacher of the Week