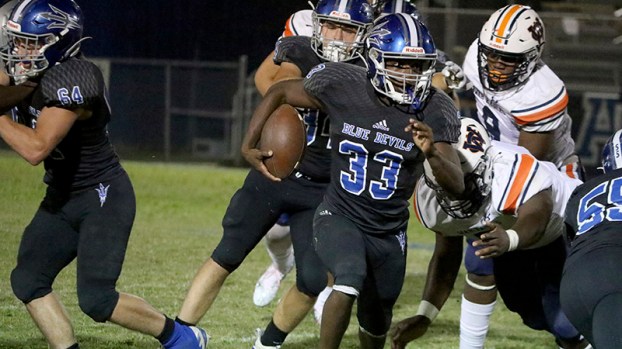 Pushing through: Pearl River Central running back Destin Coleman breaks out of a Wayne County defense during Friday's loss to the War Eagles. Photo by Jeremy Pittari

Pearl River Central’s Blue Devils put on one of the team’s strongest performances of the season Friday night, but fell to a stronger Wayne County offense 28-7.
Even though Wayne County opted to take the first possession of the game, it was the Blue Devils who got to hike the first ball of the game after the War Eagles fumbled the kickoff.
The Blue Devils also wasted no time in finding a path to the end zone through six plays spanning 27 yards during the ensuing drive. That drive was capped by a two-yard touchdown by Ty Herring. Combined with Tyler Diebold’s successful PAT, the Devils took an early 7-0 lead with 9:53 remaining in the first quarter.
Wayne County responded, but not until 3:39 remained in the first quarter. Kelnevious Walley capped a four play drive for more than 30 yards from the one yard line to find the end zone, The successful PAT tied the game at 7-7.
The War Eagles took the lead just a bit later when on second and nine at the Blue Devil 28 Braxton Lewis completed a pass to Joseph Abney. Abney crossed the end zone and a successful PAT gave the War Eagles a 14-7 lead with less than a minute left in the first quarter.
The Blue Devil and War Eagle defenses prevented additional points from reaching the board for the rest of the half going into halftime.
“Our defense play really hard and make it really tough score on them. Right now we’re not getting enough first downs to kept (the opponent) off the field,” said Head Coach Jacob Owen.
After halftime, the third quarter went the same as the second; two powerful defenses kept the other offense from the end zone.
But in the fourth, the fatigue set in. After holding on to the ball for 19 plays spanning more than 50 yards, PRC had to give the ball up on downs. War Eagle offense was able to cap off a subsequent seven play drive spanning more than 70 yards with a two yard run from defensive back Devin Parker. With 11:28 left in the fourth quarter, the PAT put the War Eagle lead at 21-7.
The final score of the game came with only 5:11 remaining to play when Walley carried the ball for more than 20 yards to pay dirt.
Another successful PAT put the final score at 28-7.
“They get tired, they get wore down,” Owen said of the Blue Devils defense. “That’s why teams are pulling away from us in the second half so much is because we’re tired and wore down.”
The Blue Devils, now 2-3 on the season, travel to Long Beach next Friday.